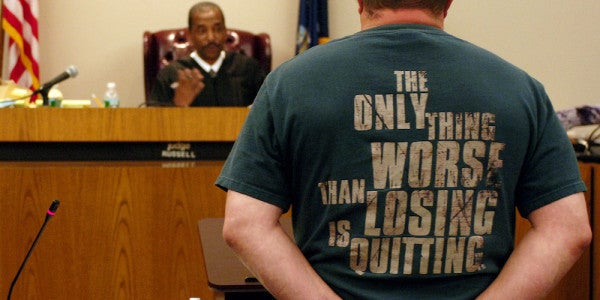 A new bill on its way to the president’s desk would give thousands of veterans a second chance after being charged with certain nonviolent crimes.

The Veteran Treatment Court Coordination Act of 2019, cosponsored by 98 Democrats and 37 Republicans, directs the Department of Justice to establish a program that provides grants and technical assistance to state, local and tribal governments to develop and maintain veteran treatment courts.

Veteran treatment courts merge local judges and lawyers with law enforcement and Department of Veterans Affairs officials, veteran service organizations and other community leaders to secure the best possible outcomes for nonviolent veterans facing the legal system. The program gives veterans the opportunity to receive help and treatment instead of jail time.

Daniel Cortez, chairman of the National Vet Court Alliance, said in addition to the Rappahannock Veterans Docket, there are six other similar courts in the state. Nationwide, Cortez said there are about 700,000 veterans in some phase of the criminal justice system and there are only about 500 active veterans treatment courts available to handle the load.

Cortez, a Stafford County resident, along with members of his alliance, partnered with nearly two dozen veteran service organizations to spend much of last year lobbying elected officials on Capitol Hill to help advance the new bill, which was sponsored by Democratic Rep. Charlie Crist of Florida.

Samantha Ramirez, press assistant for Crist, said the new bill is a huge win for veterans across the country. She said the idea for the bill came in 2017 after Crist attended a veterans treatment court in his home district of Pinellas County, Fla.

“He saw firsthand the incredible work coming out of that program and all the veterans whose lives have been greatly impacted by its existence in our district,” said Ramirez. “The congressman was incredibly inspired to help propel this message, idea and program across the nation.”

Ramirez said she expects President Trump to sign the bill into law this week. A program will then be established within the Department of Justice to work with communities who want to establish their own veteran treatment courts.

Ramirez also said Crist, a member of the House Committee on Appropriations, secured $30 million for veteran treatment courts in the Commerce, Justice and Science and Related Agencies Funding Bill, which is expected on the House floor this week.

Rep. Rob Wittman, R–1st District, was one of the Republican cosponsors of the bipartisan veteran treatment court bill, and said he has seen tremendous success in the rehabilitation of veterans through the courts, especially when they work with their peers during the process.

“This is how we get them with mentors, a system of courts that operate like drug courts,” said Wittman, whose district includes most of the Fredericksburg area. “This is a way for the judge to say, ‘I’m giving you a second chance and put you in a realm where I’m going to give you every opportunity to succeed,’ and that’s what I think makes this bill so exciting.”

In the Fredericksburg region, Ricardo Rigual is a circuit court judge who oversees the Rappahannock Veterans Docket.

Rigual said following an arrest, pre-trial officials at the Rappahannock Regional Jail ask inmates a series of standard intake questions to help identify veterans who may suffer from PTSD or other mental health issues, substance abuse, or have fought in wars and have never had a criminal record. Rigual said candidates for the program are usually high-risk, high-needs individuals, charged with serious, nonviolent crimes.

“The next morning, the process starts,” said Rigual. “We try to get them into the program as soon as possible, with some sort of a plea agreement that includes the veterans docket.”

At the completion of the program, Rigual said the agreement between the client, the commonwealth’s attorney and the courts, could result in the charges being reduced or dismissed.

One of the many duties performed by Kelly Hale, director of programs and community corrections at the Rappahannock Regional Jail, is serving as the local veterans docket administrator.

“There are so many members of this team and it’s phenomenal what they do,” said Hale. “We have our VA resources, the Rappahannock Area Community Services Board, PTSD and substance abuse counselors.”

Hale, who lobbied along with Cortez and others for passage of the new bill, also has 20 years’ experience with the Rappahannock Regional Drug Court.

“The fact that people are acknowledging the need [for a veterans treatment court] and now it’s going to the president for his signature is amazing,” said Hale. “It’s everything that we wished and hoped for.”

“Beyond just dropping my charges, they helped me so much,” said Antinori, who was facing felony charges from a 2017 incident. “As a veteran, I knew the resources were there, but I never really sought them out.”

Antinori is back in school, and said through the programs’ network, he also found a job.

“Every time I went into court, there was a whole group of people, the VA and various veterans groups,” said Antinori. “If you presented a problem to the judge, he would immediately point to someone in the room, or put you in touch with someone who could address your problem.”

Wittman said the new bill will now be able to help veterans like Antinori across the country.

“I think it’s our duty as a nation to make sure not a single man or woman who fought for our nation is left behind,” Wittman said. “This is a way for us to give back to them, to get them back on a positive track. It’s this nations’ obligation to do that.”

Ramirez called the bill “monumental legislation for our veterans.”

“Our veterans deserve nothing less than these treatment courts,” said Ramirez. “It just made all the sense in the world to be able to offer veterans on a nationwide scale access to treatment, instead of jail time.”