Air Force veteran Anthony Luton has seen a lot of things in life, good and bad. Now he wants to use his experience to help others like him 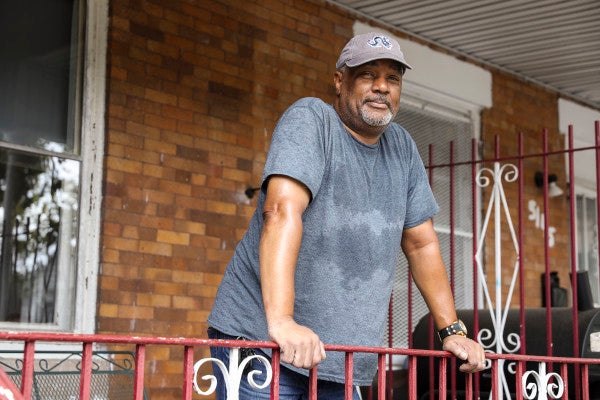 PHILADELPHIA — Anthony Luton has seen a lot of things in life, good and bad.

A Vietnam-era veteran, the West Philly man served his country in the Air Force and struggled with service-connected depression for years before he knew what was wrong with him. He’s been through addiction, and come out the other side. Homelessness, too.

By the time he was in his 60s, Luton was well on his way to earning a college degree in behavioral health. But he didn’t want to wait to help people. He felt he already had something of value to offer: his home.

“It’s a four-bedroom house my mother left me,” Luton said. “I felt it should be filled with veterans who are having issues returning to civilian life. I’ve had my challenges. I’m trying to give back whatever I can with the time I have left.”

But his Mill Creek house was in serious need of repair. Luton started Googling and found the help he needed to make it more livable: Habitat for Humanity.

The housing not-for-profit has a global reputation for building new homes for people in need. But in the City of Brotherly Love, with its large volume of aging housing, Habitat’s home-repair program is even bigger.

“Most people know us for new construction,” said Corinne O’Connell, CEO of Habitat Philadelphia. “About ten years ago, in addition to new home building, we started doing critical home repairs. That has grown tremendously.”

That includes 114 homes belonging to military service veterans. Those repairs have been accomplished with the help of $1.1 million from the Home Depot Foundation, which is continuing to fund Habitat to fix up veterans’ homes.

The repair needs are great.

“In Philadelphia, there are 136,000 owner-occupied homes that in the last that were deemed inadequate or severely inadequate,” according to the most recent survey from the U.S. Department of Housing and Urban Development survey, O’Connell said.

Prior to the pandemic, home-repair work was done while the owners were in the homes. But the program was paused in XX month, out of fear of COVID-19 infection of both residents and repairers .

In mid-August, Habitat was able to obtain a guesthouse for homeowners to stay in while their home repairs are being done, so the program has resumed.

Luton’s home-repair story pre-dates the pandemic. The work was completed in March 2019. Unlike most Habitat homeowners who use their fixed-up properties for themselves and immediate or extended family members, Luton decided to share his home with veterans like himself.

“It’s a safe place, an anchored place for him, and he’s opened the door so others can have that,” O’Connell said.

“The military has a process for taking a civilian and turning him into a soldier,” said Luton, “but at the end of their use, there is no reverse of that process.”

When Luton signed up for the Air Force in 1974 after graduating from University City High School, he thought it would be his career. He wasn’t sent to Vietnam. Instead, he served in Europe, handling munitions. It was dangerous work. By 1976, he’d had enough.

When he returned home, people who knew him told him he was different. He was anxious, depressed. Many troubled years followed. He worked for temporary agencies in information technology. He started using stimulant drugs – cocaine, diet pills, whatever made him feel better — and got addicted to them. He lost a marriage and found himself in shelter.

Finally in 2003, he said, he was diagnosed with service-related clinical depression. In 2005, he moved back to Philadelphia to live with his mother in the house he now owns. It had belonged to his maternal grandmother.

Luton still had a lot of healing to do. But by 2012, he was clean and in recovery. Thanks to veteran’s benefits, he was working on a Bachelor’s degree in behavioral health. By the time his mother passed away in 2018, he said, he had made his amends to her, taking care of her for the last year and a half of her life.

That’s when he started looking at how he could help others. He knew he eventually wanted to be a substance-abuse or behavioral counselor when he completed his studies, but he wanted to do something sooner.

“In order for me to move my recovery further, I’m going to have to help someone who is struggling,” he said. “I can’t wait until my life is perfect to offer help “

So Luton started Googling. That led him to the Home Depot Foundation and to Habitat, and to his renewed home — a safer, stable place for him and a sanctuary to extend to others.

Luton has rented rooms to a couple of fellow service members so far. What they pay helps with the upkeep of the home, and they share all the common areas. It’s an informal arrangement of fellowship.

“There’s always opportunity for us to chat,” Luton said. If he has information to share that can help his housemates, he does. Mostly, they support each other just by being there — fellow soldiers.

As for Luton, now 64, he’s nine credits away from his Bachelor’s degree from Drexel University. He’d like to get his Master’s, also and become a counselor. “I want to feel I was able to help someone,” he said. “My degree is going to allow me to do that.”