Officer Nathaniel R. Hendren, a Marine Corps veteran, is accused in the shooting of Officer Katlyn Alix, an Army veteran, while they were playing with a gun 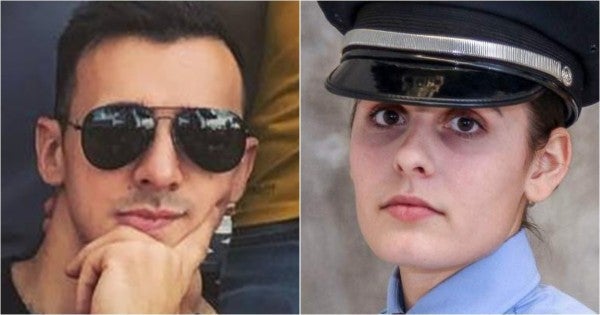 ST. LOUIS — A police officer who shot and killed another officer early Thursday was charged Friday with involuntary manslaughter and armed criminal action, both felonies.

Officer Nathaniel R. Hendren, 29, is accused in the shooting of Officer Katlyn Alix, 24, while they were playing with a gun.

According to the statement of probable cause, Hendren and Alix were playing with firearms. Hendren took all the bullets out of a revolver and then put one back in. He spun the cylinder, pointed it away and pulled the trigger.

Alix was taken to St. Louis University Hospital, where she was pronounced dead.

Hendren was on duty, as was his partner, also 29, who was not identified. Both men were described as close friends and frequent partners of Alix while patrolling the Second District.

Alix, who was off duty, went to Hendren's home in the 700 block of Dover Street in the Carondelet neighborhood.

Hendren and his partner were working a late shift Wednesday and attended roll call at their station along Sublette Avenue, a source said. Investigators believe that shortly after roll call, they went to Hendren's house, a source told the Post-Dispatch.

The house is about two miles from the southeastern border of the district they were supposed to be patrolling. Under department policy, on-duty officers are required to remain in their assigned districts at all times.

Officers are required to “constantly patrol his/her beat, except when on special assignments and shall not lounge, loaf or gather with others at any place,” according to the “Responsibilities of the District Police Officers” section of the police manual.

At some point, Alix arrived at the house. She was off duty. The partner told investigators that he told Hendren and Alix they should not be playing with guns, and reminded them they were police officers. He said he didn't want any part of it and started to leave, but before he got outside, he heard a shot.

Hendren and his partner reported the shooting on their police radios at 12:56 a.m. Thursday and loaded Alix into their police department SUV, taking her to the hospital.

At the hospital, Hendren head-butted the back windshield of a police SUV parked nearby, breaking it, sources said. He suffered minor injuries to his head, and remained hospitalized, sources said.

The police department refused to confirm that Hendren was hospitalized, how the window to the SUV was shattered or any other details about the case. Chief John Hayden said in a five-minute news conference early Thursday that the department believed it was “accidental,” but has not elaborated. In a news release issued later Thursday, the department wrote that the officer “mishandled” the weapon.

Public Safety Director Jimmie Edwards said Friday that Hayden's statement was based on the information they had initially. Hayden, he said, had been “very forthright in terms of transparency and accountability, but these situations oftentimes change and when investigations are done, these situations will change, it's been very fluid.”

On Friday, a statement from department spokesman Sgt. Keith Barrett said: “Chief Hayden promised Officer Alix's family that he would ensure that our Force Investigation Unit would conduct a thorough and competent investigation regarding this incident. Today detectives of the Force Investigation Unit presented their initial findings to the Circuit Attorney's Office which resulted in warrants being issued for Involuntary Manslaughter and Armed Criminal Action.”

Hayden's office directed all inquiries to the circuit attorney's office.

She said her office filed charges against Hendren “based upon the evidence.”

“I have said many times before that I will hold people accountable who violate Missouri law, regardless of their profession, public status and station in life,” she said. “Today, as much as it saddens me and my staff to file these charges, Katlyn and her family deserve accountability and justice.”

Edwards said the department had been “weakened” by the shooting.

“This should never happen. We don't expect this to happen. We expect our officers to utilize their training and be the most responsible people ever when it comes to handling firearms and unfortunately, it did not happen in this situation,” he said. Edwards said he would like to see Hendren fired as soon as possible.

The police department has taken hits to its reputation in recent years. Four officers were indicted on federal charges in connection with the beating of an undercover police officer during protests in St. Louis in 2017, and were accused of mistreatment by numerous protesters. Four former officers were charged with taking bribes from a chiropractor's wife in return for nonpublic accident reports to solicit business for her husband's practice. And the St. Louis circuit attorney's office blacklisted 28 officers in 2018, including them on an “exclusion list” that bans them from bringing cases to the office for charges.

Although Gardner has declined to say why the officers were included on the list, she has talked about her need as a prosecutor to “defend the integrity of the criminal justice system.”

Both Alix and Hendren have military backgrounds. She served six years in the Army. He served as a Marine, sources said.

Alix was a two-year veteran on the force. Hendren had one year of service, and his partner had about two years.

A Gofundme account has been set up online by one of Alix's former partners to help pay for funeral expenses. It had raised about $3,600 toward a $5,000 goal in hours.

Visitation will be from 1 to 9 p.m. Tuesday at Kutis Funeral Home, 2906 Gravois Avenue. A prayer service will be at 9:15 a.m. Wednesday at the funeral home, followed by a 10 a.m. Mass at the Cathedral Basilica.