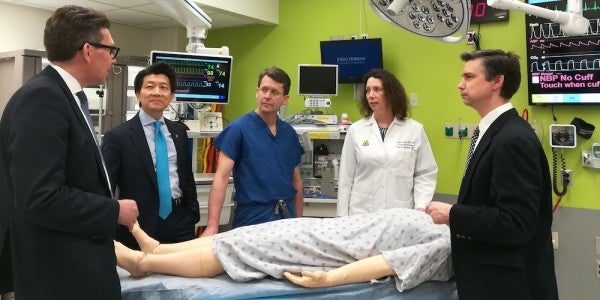 The man, who has not been identified, was injured in an IED blast in Afghanistan several years ago.

“We are hopeful that this transplant will help restore near-normal urinary and sexual functions for this young man,” said W.P. Andrew Lee, M.D., professor and director of plastic and reconstructive surgery at the Johns Hopkins University School of Medicine.

The Pentagon has focused on advancements in genital transplants to treat the scores of soldiers injured by IEDs in Iraq and Afghanistan.

In a statement, the recipient said his injury was “not an easy one to accept.”

“When I first woke up, I felt finally more normal…with a level of confidence as well. Confidence… like finally I'm OK now,” he said.

The patient is expected to be discharged from the hospital this week.

The procedure is the second penis transplant to be reported in the U.S., but the first full transplant of its kind.