A siren or alarm can trigger Sandra Ewing’s reflexes, making her believe she is back in Afghanistan. Her instinct is... 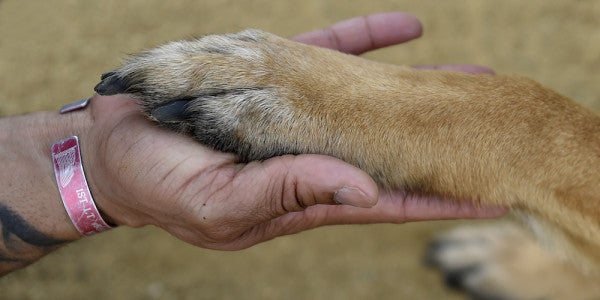 A siren or alarm can trigger Sandra Ewing’s reflexes, making her believe she is back in Afghanistan.

Her instinct is to run to an aid station as she would when she was overseas.

But she is at home in Janesville, miles away from falling helicopters and enemy attacks. Her muscular Great Dane/German Shepherd mix, Arrow, constantly reminds her of that.

Ewing was diagnosed with post-traumatic stress disorder after coming home from a 4½-year career as an Army medic. During that time, she spent nine months in Afghanistan.

Ewing said her doctor at the William S. Middleton Memorial Veterans Hospital in Madison, Wisconsin, prescribed her a service dog to ease the effects of the disorder. The doctor’s authorization gives her—and Arrow—protections under the Americans with Disabilities Act.

The law states: “A service animal is defined as a dog that has been individually trained to do work or perform tasks for an individual with a disability. The task(s) performed by the dog must be directly related to the person’s disability.”

After having Arrow at her side for more than a year, Ewing has learned there are plenty of public misconceptions about service animals.

Ewing said she ran into those misconceptions during a visit with Arrow to the Citgo gas station and convenience store on Parker Drive in Janesville.

The gas station’s owners had always been nice, Ewing said.

But on this particular visit, Ewing said the owner’s wife told her she had to tie her dog to a post outside because the dog should not be around food. When Ewing tried to explain that Arrow was a service dog, the woman disregarded her explanation.

To avoid causing a commotion, Ewing tied Arrow to the post, she said.

After leaving the store, Ewing couldn’t find Arrow. He had broken free of his harness and run away. She believes the dog was anxious and wanted to find her because he knew he had a job to do.

Neighbors found Arrow down the street and returned him to Ewing.

Ewing went back to the gas station and showed owner Makhan Maan, who was in the beer cooler at the time, an identification card that describes Arrow as a service dog. She said she pleaded with him to let Arrow in the store in the future.

Maan told The Gazette that he remembers the situation. He said his wife told Ewing to take the dog outside because Ewing never told them that Arrow was a service dog.

“She never showed us anything,” Maan said. “She showed me afterward, but it was too late anyway.”

Maan said Arrow ran around in the store, scaring customers and “touching everything.” Ewing disputes that.

The Americans with Disabilities Act does not require a person with a service dog to show identification. When Maan was asked if he understood that, he said he still would not let animals into the store without identification.

“Then everybody can bring their dog in,” Maan said. “If she explains it to us, we have no problem with that.”

The Gazette was unable to reach a representative from Citgo’s press team for comment for this story.

Service dogs and the ADA

At home, Arrow is a jubilant dog who shows love to every new friend who walks in the door.

However, his demeanor changes when he wearing his service vest. He is ready for work.

The ADA does not require service animals to wear vests, ID tags or specific harnesses. Nor does it require Ewing to carry identification about her service dog.

Under the act, service animals are allowed inside any place their owner goes, including places with food.

It states: “A person with a disability cannot be asked to remove his service animal from the premises unless the dog is out of control and the handler does not take effective action to control it or the dog is not housebroken. When there is a legitimate reason to ask that a service animal be removed, staff must offer the person with the disability the opportunity to obtain goods or services without the animal’s presence.”

What a service dog does

Ewing said it was “horrible” adjusting to civilian life after her military service.

Arrow walks on her left side when she is in public, scanning their surroundings for anyone or any item that might get too close.

Ewing said Arrow will walk between her and barriers to prevent her from panicking.

If a siren goes off, Arrow will lick Ewing’s face, which keeps her from spiraling out of reality.

In a 2013 article, Ewing said her nine-month tour in Afghanistan changed her. She and others in her unit were constantly on guard.

They learned not to trust anyone.

If a person touches her or gets too close when she is in public, Ewing instinctively reacts aggressively.

But she said she knows she can’t do that in Janesville—not in public and not in civilian clothes.

Lt. Terry Sheridan of the Janesville Police Department said service animals should not face any problems going where their owners go.

However, the same legal protections do not apply to emotional support animals, which are becoming more popular, Sheridan said.

Emotional support animals are used to provide comfort to their owners, but they often don’t have any specific training.

The Americans with Disabilities Act mandates that service animals be dogs or sometimes miniature horses. Emotional support animals can be cats, dogs or animals as exotic as peacocks.

Emotional support animals must comply with city animal ordinances, Sheridan said, and individual businesses can decide whether to permit those animals or not.

Sheridan said he does not know of any situation in which police had to intervene with an emotional support animal. If police were called, he said, they would look at each situation separately and try to get voluntary compliance from all parties involved.

Ewing said she adopted Arrow from the Humane Society of Southern Wisconsin. The staff helped her pick an animal with the right temperament and attitude to be a service dog.

To save time and money, Ewing trained Arrow herself with help from War Dogs, a Chicago nonprofit that trains dogs to help veterans with post-traumatic stress disorder and traumatic brain injuries.

Under the ADA, “people with disabilities have the right to train the dog themselves and are not required to use a professional service dog training program.”

Ewing said she waited until Arrow was trained at home before bringing him in public. She introduced him in public slowly, taking him places such as the VA hospital.

It is not uncommon for veterans to use service animals, Christina Sitton, a program analyst at Madison’s VA hospital, said via email.

The VA determines the need for service dogs on a case-by-case basis, Sitton said. Clinicians evaluate the patient’s ability, means, environment and goals before making the recommendation.

Some issues veterans face include nightmares, anxiety and distress. However, there is no typical set of symptoms that indicate a need for a service dog, Sitton said. Each treatment plan is personalized with help from doctors.

“A trained service dog is not meant to be a replacement for therapies or medication treatment plans,” she said. “Rather, it is more considered a tool in the array of options one may consider when recovering from a condition.”

As she transitioned back to civilian life, Ewing had to drop out of school and quit her job at a medical facility because the disorder was too much to handle, she said.

With Arrow, she has an easier time doing things outside her house, she said.

While shopping at Festival Foods in Janesville, Ewing and Arrow walked through the aisles like partners.

Arrow trotted, ears perked, ready to be whatever she needed him to be.