Marinna Rollins told her Facebook friends on April 17 that she found a new home for her PTSD therapy dog,... 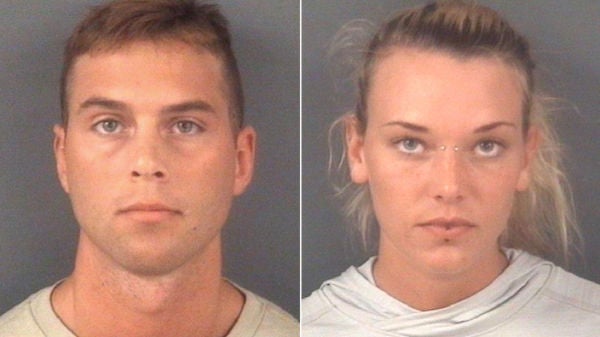 Marinna Rollins told her Facebook friends on April 17 that she found a new home for her PTSD therapy dog, Cam.

Instead, she and her boyfriend, soldier Jarren Heng, are accused of shooting Cam multiple times with a rifle execution-style. Authorities said they filmed the incident.

“They can be heard on the tape laughing and giggling as the dog was being killed,” Cumberland County District Attorney Clark Reaves said at the couple’s first court appearance on Tuesday. “It was a therapy dog.”

Rollins, 23, and Heng, 25, both of the 5600 block of Netherfield Place, have each been charged with cruelty to animals and conspiracy, arrest documents said.

However, Reaves successfully advocated for each of their bail to be increased to $25,000 while they came before District Court Judge Toni King at 2:30 p.m. at the Cumberland County Detention Center.

Reaves told King he was asking for the increase “due to aggravating factors and the cruel nature of the case.”

Cam was a sweet dog who loved people despite the betrayal he faced by several of them. A stocky pitbull, Cam’s dark gray patches on his white fur made him look like a miniature cow.

“Please someone show this boy what a real loving forever home is,” the group wrote under his photo. “He is super-friendly, very sweet, calm and loving. He just wants someone to love him and give him a chance.”

Rollins’ husband adopted Huey shortly after separating from Rollins in January of 2016. He asked that he not be named because of the death threats Rollins and Heng are facing.

“He was great,” Rollins’ husband said.

Huey followed Rollins’ husband around wherever he went. They often shared a bed. Rollins’ said Huey even saved his when his house got broken into one night.

“Huey jumped off the bed and barked,” Rollins’ husband said. “Huey scared them and saved the day.”

The burglars ran away and never came back again after seeing Huey.

When Rollins’ husband, who is in the Army, learned that he was assigned to go to South Korea, he said Rollins begged him to keep Huey.

“She cried,” Rollins’ husband said. He let her keep the dog. He feels sick about it now.

While Rollins’ husband was in South Korea, she changed Huey’s name to Camboui. Rollins’ friends knew the dog simply as “Cam.”

She also got Cam certified as an emotional support animal for post-traumatic stress disorder, according to friends. Friends said she has been diagnosed with additional mental health issues.

Rollins joined the Army in February of 2014, according to a spokesman with the Army Human Resources Command at Fort Knox. She served as a multimedia illustrator in the Army and spent time in South Korea.

A friend, who asked not to be named for fear of her safety, said Rollins got into many arguments with fellow soldiers and higher-ups during her time in the Army.

“She made up a lot of stories,” the friend,who served with her in the Army, said.

Rollins medically retired from the Army in January of 2017, according to court documents. It is unclear as to when Rollins and Heng began dating.

Heng is a soldier in a unit that reports to the Army Special Operations Command, Lt. Col. Robert Bockholt said. Bockholt declined to reveal the exact unit Heng is in.

Rollins’ friend from the Army said the couple had a volatile relationship.

“He was very controlling,” the friend said. “He didn’t like her having friends.”

In April, Rollins began posting on Facebook in attempt to find Cam a new home. She told her friend that caring for him was too expensive.

On April 17, she posted that she had a great last day with Cam and that he was going to a new home.

“Sad he has to go, but he will be much happier where he is heading off to,” Rollins wrote on Facebook.

Heng replied to Rollins’ post with a smiley-face emoji.

“He’s going to have such a great new life,” Heng wrote.

Rollins and Heng took pictures with Cam in their Army uniform pants and boots. Heng was shirtless and Rollins wore a pink polka-dotted bra, which revealed a large tattoo of a rifle across her upper chest.

Both Rollins and Heng held a bottle of Coca-Cola and a glass bottle in the pictures.

The couple next tied Cam to a tree, the warrant said. Cam sat down and turned away from Rollins right before she shot him in the head. She then shot him a few more times, according to court documents.

Heng and Rollins took turns filming the incident, according to the warrant. The Fayetteville Observer obtained a copy of three videos taken by Heng and Rollins.

After they both shot the dog several times, Rollins dragged Cam’s dead body around before shoving the dog in a shallow grave, the warrant said.

The Cumberland County Sheriff’s Office investigated the shooting. During the course of the investigation, they found multiple videos of the shooting filmed by Heng and Rollins and text messages discussing the shooting.

Cumberland County District Attorney Billy West said he couldn’t talk much about the case due to the fact it is open.

“We will work diligently to seek justice in this case,” West said. “What we do know about the case is disturbing.”