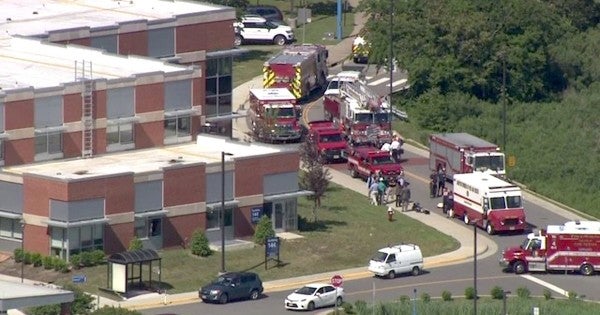 The “overwhelming” odor that prompted a Veterans Administration health center in Virginia to be evacuated Wednesday afternoon turned out to just be a very pungent sample of urine, reports the Daily Press.

It was so strong that a Hampton police HAZMAT team was called, streets were blocked off, and at least two people who came in contact with the urine had to be “assessed” at a nearby hospital, said the newspaper.

Hampton is on the Virginia coast, about 80 miles southeast of Richmond.

The smell began permeating the Hampton VA Medical Center around 2:16 p.m. Wednesday, starting on the first floor and then drifting to upper levels, reported WTKR.com.

VA officials later revealed the smell emanated “from a urine sample that a veteran (had) dropped off,” according to 13News.

The station reports the smell was “chemical-like” and 50 people “were affected by it,” including the two employees who were hospitalized.

Video of the scene shows multiple fire trucks, ambulances and other emergency vehicles filling a nearby road, as media helicopters fly over.

WTKR reports the unidentified veteran's urine sample was taken to a lab in Richmond for further study.

The evacuation was in place from 2:30 p.m. unti 7 p.m. and involved more than 120 patients and staff members, reported WAVY.

John Rogers with the Hampton VA told the station “it's still unclear what may have been mixed with the urine, if anything” to cause the odor.