The Department of Veterans Affairs is reviewing a plan for opening its facilities to the public, Secretary Robert Wilkie said 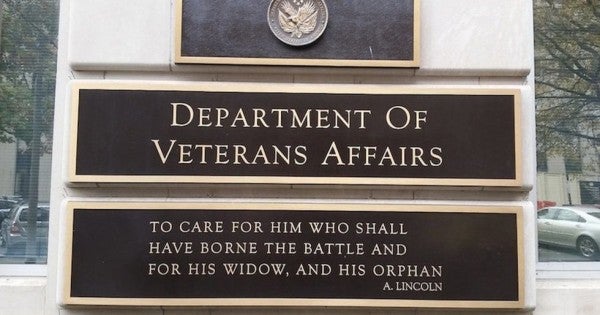 The Department of Veterans Affairs is reviewing a plan for opening its facilities to the public, Secretary Robert Wilkie told The Fayetteville Observer on Monday.

Wilkie, who was named to the White House Coronavirus Task Force in March, said the plan would be reviewed by the task force Monday.

“We will start reopening in areas that have not been hard hit,” he said without indicating the plan's exact timeline.

Since the novel coronavirus was declared a pandemic, the VA has taken steps to stop its spread, including limiting visitors at facilities, questioning and testing visitors before allowing access to facilities, reducing nonurgent medical procedures and elective surgeries and asking veterans to use telehealth virtual appointments and to refill prescriptions online if possible.

Wilkie said states with little to no coronavirus patients could be among the first to reopen their VA facilities to the public.

“The point is, there's huge swaths of the country that hasn't been impacted by this, and we need to get our people back into routine, but I'm only going to do it if we meet the conditions set by (the Centers for Disease Control and Prevention),” Wilkie said.

During the past few months of the pandemic, about 38% of the VA's 14,000 beds have been occupied as a result of the virus, Wilkie said.

Wilkie said emergency operation centers were set up the last week of January, with 19 centers operating in 18 regions across the country to screen patients.

Of about 7,800 patients in VA nursing homes, Wilkie said, 19 have tested positive for the virus. Within the VA, there were about 2,500 positive cases and 529 deaths associated with the virus nationwide as of Monday.

Of the cases, one is a coronavirus patient in acute care at the Fayetteville VA Medical Center on Ramsey Street.

“Think about where you're sitting and where I grew up,” said Wilkie, who is a Fayetteville native. “You're sitting underneath the largest installation in the free world and then you're 90 minutes away from 40% of the entire United States Marine Corps … we have a younger population in our VA, but we also have a lot of retirees who stay in the Fayetteville area or stay at the Camp Lejeune area.”

There are no COVID-19 patients in Durham or Asheville; there are two in Salisbury, Wilkie said.

Of the several thousand VA patients who have tested positive for the virus nationwide, Wilkie said about 5,000 have recovered.

“The bottom line for us is that we (made) those (preventative) measures rapidly … and I certainly think it has been paying off,” he said.