Update: The Indianapolis Star is reporting that the manager in question has been placed on paid leave pending an investigation. ... 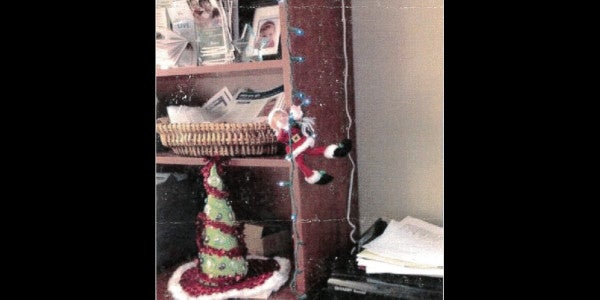 Update: The Indianapolis Star is reporting that the manager in question has been placed on paid leave pending an investigation.

A manager at a Department of Veterans Affairs medical center in Indianapolis mocked the care and treatment of veterans on a variety of issues, including suicide, in an email sent in December of 2014, according to a report by Tony Cook at the Indianapolis Star.

The manager who sent the email, Robin Paul, is a licensed social worker who manages the hospital’s Seamless Transition Integrated Care Clinic. In emails obtained by the Star, Paul wrote what was apparently an attempt at humor depicting a toy elf as a veteran attempting to receive VA care.

Subject lined “Naughty elf in the STICC clinic,” the email’s photographs and captions contained depicted the elf performing a pap smear on a Barbie doll, attempting to obtain a prescription for Xanax, and hanging himself from an electrical cord.

In a statement provided through the medical center’s public affairs office, Paul told the Star, “I would like to sincerely apologize for the email message and I take full responsibility for this poor judgment.”

She added, “I have put my heart and soul into my work with Veterans for many years. I hold all Veterans and military personnel in the highest regard and am deeply remorseful for any hurt this may have caused.”

The clinic had long been aware of the email. A spokesman for the facility, Julie Webb, told the Star that administrators were made aware of the December email “a couple of months ago.”

The news comes less than a year after scandal stemming from a VA clinic in Phoenix, Arizona, on secret waiting lists and endless wait times rocked the VA, leading to the resignation of Veterans Affairs Secretary Eric Shinseki and to his succession by Bob McDonald, a former CEO at Procter & Gamble, who took over pledging to instill accountability in the massive federal agency.

But McDonald, himself an Army veteran, has suffered his own setbacks. He was chided in the press for an erroneous claim about how many VA employees were held responsible following the Phoenix scandal, and more recently faced criticism for erroneously claiming to have served in special operations forces in a conversation with a homeless man claiming to be a veteran in Los Angeles last month. To many, it seemed McDonald was trying to expose the man’s fraudulent claims more than he was trying to claim to be something he wasn’t.

This later episode, garnering national attention, represents another jab in the long fight to reform the VA.

“This type of behavior is completely unacceptable and we apologize to all our Veterans and their families,” a spokesperson for the VA in Washington told Task & Purpose via email. “This one incident is not reflective of the quality care and services that hundreds of thousands of Veterans receive every day from VA employees across the country. We are committed to treating our Veterans with respect and compassion and providing them the quality mental health care they have earned and deserve.”

“We hope it’s an isolated incident,” said Paul Rieckhoff, the founder and chief executive of Iraq and Afghanistan Veterans of America, as quoted by multiple news organizations. “We hope this person has been dealt with aggressively because we’re in the middle of a suicide problem.”

IAVA recently successfully secured the unanimous passage of Congress of the Clay Hunt Suicide Prevention for American Veterans Act to provide the VA with increased resources to combat the 22 suicides a day plaguing American veterans.

The scandal is compounded as Paul remains employed several months after the incident, with an annual salary just south of $80,000.

“I don't understand how keeping this individual on VA's payroll will bring accountability to a department mired in scandal and negligence,” said Republican Rep. Jackie Walorski of Indiana, a member of the House Veterans' Affairs Committee, according to a separate report by the Star. “Her continued employment only lowers Americans' confidence in the ability of the VA to provide medical care to service members, both past and present. I hope that leadership within Roudebush grasps the fact that supporting veterans and their families must be their top priority, not saving a disgraced employee.”

Paul’s mockery of veteran suicide and mental health issues comes amid concerns that transitioning veterans won’t have confidence in the VA after this series of high-profile missteps. This reality is coupled with challenges to break down stigmas surrounding mental health and suicide. It’s particularly distressing that Paul manages an office responsible for the care of transitioning veterans. To many, the manner in which she mocks suicide and mental health in private communications with her staff would disqualify her for the role.