"The humiliation, the name calling, the degrading things that have been done to us — enough is enough.” 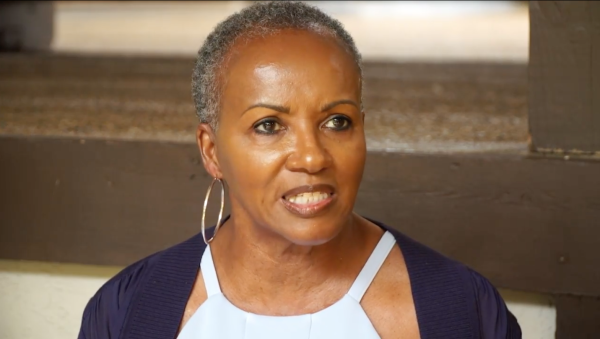 The last straw for Charmayne “Charlie” Brown was the lack of communication. That came after she filed 18 complaints of racial discrimination against the Kansas City Veteran’s Affairs Medical Center.

It was after the Navy veteran had been called “Aunt Jemima.”

It was after the 35-year registered nurse had been repeatedly passed over for promotions.

It was after a supervisor had beckoned to her with a finger and when she stepped closer, told her that he wanted to see “if he could make me come with his finger.”

When that supervisor stopped communicating with Brown, she said, that “was the straw that broke the camel’s back,” and she retired after working there 17 years. Thursday afternoon, Brown spoke out.

At a news conference in her attorney’s office, Brown said she wanted to speak out so others don’t have to experience what she did for so long. She was joined by leaders in other organizations who are calling for change and accountability at the VA.

Related: For These Women Veterans, It Wasn't Combat Trauma That Led To PTSD

Brown is part of a group of about 50 Black current and former employees who have experienced racial discrimination at the Kansas City VA and are making a stand. Over the last three months, other employees have told The Star their stories, several asking that their names not be used for fear of retaliation. But they all described one thing: systemic discrimination against Black employees.

One woman said that some staff members would start to make monkey noises when they would see a Black employee. Another woman ultimately resigned after going to work caused her to experience chest pains, nausea and vomiting.

U.S. Rep. Emanuel Cleaver, D-Missouri, said in a statement that the “disturbing reports” his office and the office of U.S. Rep. Sharice Davids, D-Kansas, have received are “unacceptable.”

“No American veteran and at no work place in this country in the year 2020 should an employee be discriminated against for the color of their skin or retaliated against for standing up to this dehumanizing behavior,” Cleaver said in the statement.

He called on leadership at the VA to be transparent and hand over documented complaints.

Sitting by her husband, Theodore Brown, Brown said discrimination at the VA grew increasingly blatant over the years. She said sometimes it wasn’t even verbal, but that she would be thrown dirty looks.

She was one of the few Black employees in a position to hire staff, Brown said, and was considered middle management. At one point, she said, her manager told her to not hire all black nurses.

Related: Sharing Stories Of War And Racism In The VA Waiting Room

Brown said she was also required to go to work an hour before her shift started and stay an hour late. But her supervisor told her she couldn’t clock the comp time due to policy. Two and a half years passed. After speaking with a co-worker, Brown said she realized the other nurses, all white, were clocking their extra time.

When she would come home after work, Brown said, she would think about how she just wanted respect. She would think about what she did to deserve the treatment. And her husband, Theodore Brown, wanted to fix it — he’s a “fixer,” Brown said — but all he could do was watch. He said the fight against racism will continue everyday, despite people who don’t want it to change.

“Now I’m watching my children go through what I went through and what my grandma went through,” Charmayne Brown said. “The humiliation, the name calling, the degrading things that have been done to us — enough is enough.”

Each of her complaints resulted in no action, she said. Instead, she faced retaliation.

The Rev. Rodney Williams, president of the Kansas City chapter of the NAACP, appeared on video at the news conference and said that while a work environment does not have to feel like home, it should never be hostile.

“The stress and the trauma that those persons have to deal with on a day to day basis when you come into the hospital,” Williams said, “I think is unfair.”

The Rev. Vernon Howard, president of the Southern Christian Leadership Conference of Greater Kansas City, said at Thursday’s news conference that his organization got involved in the case a week ago.

“We will fight with all of those who have a legitimate claim of racism and employment discrimination,” Howard said. “We do know that in this country right now the original sin of racism is causing this nation to implode.”

Howard said he is calling on the highest levels of the U.S. Department of Veterans Affairs to intervene and to defend victims of discrimination.

“We feel the anger, we feel the pain, we feel the frustration,” Howard said. “And there is a weariness. And that’s why this kind of social unrest and social upheaval is taking place in our country right now. Those frustrations are bubbling over.

“Now we are able to say to individuals who did not take it seriously. This is what we have been ignoring racism still exists, and we must stand as a nation together.”

The Star left a message with the VA on Thursday. A statement previously issued by a VA spokesman in response to another race discrimination lawsuit filed in February said the center doesn’t “tolerate discrimination or harassment of any kind,” and is “proud of its diverse and inclusive culture.”

In that statement, the spokesman said the VA encourages employees to contact the Equal Employment Opportunity manager, Employee Threat Assessment Team or the VA’s Office of Resolution Management at 888-566-3982.

“Every complaint is thoroughly investigated and handled appropriately,” the VA said in the statement. “Based on the outcome of that process, VA takes appropriate personnel actions, if warranted.”

Justice Gatson, a Kansas City-based organizer for the American Civil Liberties Union of Missouri, also appeared on video at the news conference and said the reports coming out of the VA need to be immediately addressed.

“We are calling for accountability, transparency, and an answer to their demands that they have set forth in order to write these tremendous wrongs that are happening,” Gatson said.

Amid the COVID-19 pandemic, Gatson said, Black doctors, nurses and medical technicians deal with additional weight as they care for Black patients.

“So right now when we’re talking about Black Lives Matter, when we’re really, really pushing that message, let’s make sure that we are acting in ways that show that we need it,” Gatson said.

For those who are still working at the VA, Brown said she wants them to know that they do have a voice and that they do matter.

“As we unite, we become stronger,” Brown said. “And when we begin to speak, our voices will be heard. If you sit and say nothing, then nothing will be done.”