A hiring freeze imposed Monday on federal agencies by President Donald Trump could affect veterans seeking government jobs and others... 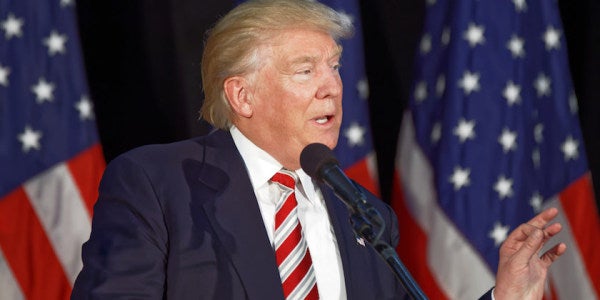 A hiring freeze imposed Monday on federal agencies by President Donald Trump could affect veterans seeking government jobs and others who rely on health care from the Department of Veterans Affairs, a researcher and union leader said Tuesday.

“The [Department of Defense] has the highest percentage of veterans, followed by the [Department of Veterans Affairs], but they’re widely dispersed throughout the government, not just in the defense industry,” said Katherine Kidder, a fellow at New American Securities, a Washington, D.C. think tank. “[The freeze] does have the potential to disproportionately affect them.”

Trump signed a presidential memorandum Monday – his first full work day in the White House – mandating federal agencies not fill open positions. The hiring freeze does not apply to military personnel, and the memo states there could be exemptions for jobs necessary for national security or public safety.

But some members of the veterans community contend the job freeze could hurt veterans, many of whom seek employment with the federal government and whose VA health care could be affected if jobs at the agency remain unfilled.

Veterans fill positions in the federal government at higher rates than the rest of the population. In 2010, former President Barack Obama issued an executive order giving preference for federal jobs to eligible veterans over other applicants.

In fiscal year 2009, veterans comprised 25.8 percent of the federal workforce, according to the Office of Personnel Management. In fiscal 2015, they comprised 30.9 percent, or 623,000 of the 2 million-person workforce.

“Many of them bring their careers from the military, they get veterans preference, and they continue to work for the federal government,” said J. David Cox, president of the American Federation of Government Employees, which is the largest federal employee union and represents about 670,000 workers. “This is going to have an impact upon veterans leaving the military and being able to find jobs.”

He said some union members were reaching out to their representatives in Congress with concerns about the hiring freeze signed Monday by Trump.

After the signing, Paul Rieckhoff, president of Iraq and Afghanistan Veterans of America, posted on the social media site Twitter that according to an IAVA survey conducted of about 1,500 of its members, 32 percent work for the government.

He asserted the hiring freeze could increase veteran unemployment. Unemployment among veterans is about 5.7 percent, down from about 6.5 percent in November, according to the Bureau of Labor Statistics.

“Job-seekers waiting to hear about a hiring determination just had their hope dashed,” Rieckhoff said later Tuesday in a statement.

Freeze at the VA

Trump promised the employment freeze in his “contract with the American voter” released during his campaign. He has previously said “real change” meant “draining the swamp of corruption in Washington.”

“There’s been, frankly, to some degree a lack of respect for taxpayer dollars in this town for a long time,” Press Secretary Sean Spicer said Monday during a news conference at the White House.

He confirmed Tuesday that the VA is part of the freeze, calling the VA “broken” and saying “hiring more people isn’t the answer.”

Spicer also said the freeze would “pause” hiring until a plan is formed. Trump’s memo states the Office of Management and Budget would recommend a long-term plan within 90 days to cut the federal workforce through attrition.

But the VA listed 2,283 job openings on the federal hiring website as of Tuesday. The postings were for positions across the country and included health care providers, social workers and human resources, housekeeping, food service and transportation workers, among other jobs.

Leadership at the VA is trying to determine how the hiring freeze will affect the agency.

According to the memo, federal agencies may exempt certain positions from the hiring freeze, but a process to allow exemptions was not outlined. The VA is seeking answers from the White House and the Office of Personnel Management, VA spokesman Randy Noller said.

“It certainly means there will be positions in VA that remain unfilled,” Kidder said. “How many of those, I’m not entirely sure.”

The VA has struggled recently to hire an adequate number of health care providers.

The Government Accountability Office issued a report Monday stating there were delays in hiring “critical” clinical staff because of a lack of human resources employees across the health care system.

Veterans organizations have advocated for more nurses and doctors, and the VA has previously pushed Congress to loosen rules on 40-hour work weeks for health care staff in order to better attract them to the VA.

Sherman Gillums, director of Paralyzed Veterans for America, said his organization’s “highest priority” was to push for the Trump administration to hire more nurses.

“If they hired 1,000 more nurses, they still wouldn’t have enough,” Gillums has said.

Rieckhoff said he’s heard from “countless” members of his organization who are concerned about how their health care will be affected.

“This freeze raises serious concerns about the president’s commitment to veterans and improving the VA,” Rieckhoff said in a statement. “At a moment when the VA should be prioritizing responsiveness and recruiting and hiring the best-trained physicians, nurses and mental health counselors in the country, the president has tied the acting secretary’s hands.”

“If we’re going to reduce the wait times, this is not a good thing to have happen,” Tester said.

Boozman said he wanted to expedite the confirmation of VA Secretary nominee David Shulkin, so Shulkin could “get in there fighting.”

They set Feb. 1 as the date for Shulkin’s confirmation hearing.

“We’re short-handed. I know President Trump and the people around him are aware of this,” Boozman said. “I think the committee can also help make him aware.”