The Department of Veterans Affairs has been credited with major medical advancements since its research office was created in 1925... 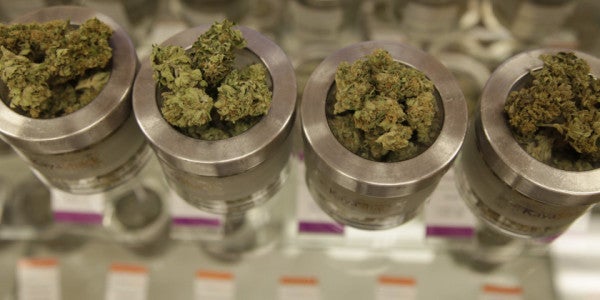 The Department of Veterans Affairs has been credited with major medical advancements since its research office was created in 1925 — the cardiac pacemaker, shingles vaccine and the first successful liver transplant topping its list of accomplishments. Now, a group of lawmakers want VA researchers to turn their attention to medical marijuana.

Lawmakers on the House Committee on Veterans’ Affairs – led by the highest-ranking enlisted soldier to ever serve in Congress – are calling on the VA to initiate research into the efficacy of medical cannabis. In a letter Oct. 26 to VA Secretary David Shulkin, the lawmakers cited the country’s opioid crisis and the growing demand from veterans and major veterans service organizations that want cannabis available as a treatment option for chronic pain and post-traumatic stress disorder.

VA research into medical marijuana, the lawmakers wrote, is “integral to the advancement of health care for veterans and the nation.”

The letter marks the first instance that the leadership of veterans’ affairs committee in the House or Senate has urged a VA secretary to conduct research on medical marijuana, Anderson said. Only recently, medical marijuana was thought of as a “fringe issue” by staff of committee Democrats.

The timing of the letter was based on Shulkin’s comments regarding medical marijuana in May, followed by months of advocacy from groups such as the American Legion. During a “State of the VA” address at the White House, Shulkin – who is also a practicing physician — acknowledged there was some evidence marijuana could be effective as a medical treatment and said he was open to learning more about it.

“The secretary expressed interest to look into this. I think he was speaking from a personal standpoint, but it was on a public stage,” said Megan Bland, a staff member for committee Democrats. “When you look at that, and take the veterans’ suicide rates, the opioid crisis and the complexity of post-traumatic stress disorder, it just makes so much sense that if there’s a solution, we should explore it.”

Since May, the American Legion has strongly advocated for more research into medical marijuana. At its national convention in August, the organization adopted a resolution urging the VA to allow doctors to discuss and recommend medical marijuana in states where it’s legal. That’s in addition to a resolution that the group passed the previous year asking for marijuana to be removed from the list of Schedule I drugs, which include with heroin, LSD, ecstasy and others designated as having no medical use.

The Legion has been supportive of research in Phoenix, Ariz., that is the first federally approved study of marijuana’s effects on veterans with PTSD.

Related: How Vets And Their Doctors Are Getting Around The VA’s Medical Marijuana Policy »

Louis Celli, a leader within the Legion, said the organization is trying to prove to lawmakers that medical marijuana is a politically safe topic.

Celli described the letter that lawmakers sent on Oct. 26 as “the beginning of the snowball.” He noted it carried weight being led by Walz, whom Celli called a “major player in the veteran community.”

“The U.S. government has to address this issue… they can’t turn a blind eye and pretend it’s not coming to critical mass,” Celli said. “If veteran research could lead the way for a national, medical shift in the efficacy of cannabis and start that dialogue, that’s good for America.”

Staff for Democrats on the House committee found no regulatory barriers that would prevent the VA from immediately researching medical marijuana. Bland said the VA already possesses a Schedule I license, which is required by the Drug Enforcement Administration to study marijuana.

Lawmakers asked Shulkin to respond to their letter by Nov. 14, with either a commitment to develop research into medical marijuana or a detailed reason for why the VA can’t.

“Everything we looked at suggests the VA can pursue this tomorrow,” Bland said. “And if they can’t, we want them to tell us why they can’t, with the idea that hopefully we’d be able to help them overcome those barriers in the next year.”