Veterans Organization Under Siege For Marching In Inauguration Parade

On the morning of Jan. 20, as Donald Trump prepared to take the presidential oath, a few dozen national representatives... 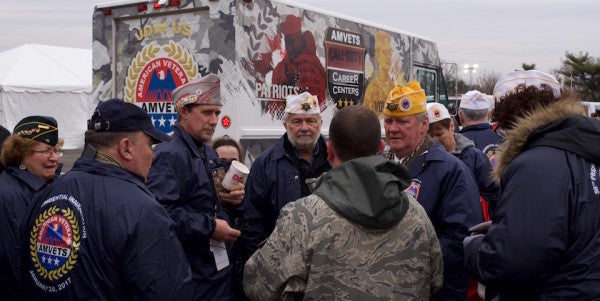 On the morning of Jan. 20, as Donald Trump prepared to take the presidential oath, a few dozen national representatives of AMVETS, one of the largest veterans service organization in the country, stood in a loose formation on a narrow road flanking the National Mall in Washington D.C. At their six o’clock, a phalanx of girl scouts in Ferrari-red beanies stood shivering in the cold rain. At their 12, a kilt-adorned bagpipe ensemble warmed up with a playful rendition of “The Lion Sleeps Tonight.” Together, the three groups represented a small section of the inaugural procession, which had been abruptly halted the moment it began. News of riots up ahead trickled in. “I’m not sure whether to be excited or on guard,” a woman said.

AMVETS applied to take part in the inaugural parade about a month before election day with the intent of marching regardless of who got elected. But for a small yet determined group of individuals it didn’t matter. In the weeks leading up to the parade, AMVETS received dozens of angry emails, Facebook messages, and phone calls from people (both members and nonmembers) accusing the organization’s leadership of endorsing Trump. Now, days after the inauguration, AMVETS says it’s being targeted by vandals who’ve inflicted thousands of dollars in damage on organization and personal property and raised concerns among employees about safety.

“We’re confident it’s because we took part in the parade,” says John Hoellwarth, an Iraq War veteran and the the AMVETS national communications director. “They’re reacting with a lot of anger and vitriol. But until we ended up with 10 of our employees with flat tires, we just took it as people have the right to say whatever they want. We’re a veterans organization and we defended the right to free speech. We support that.”

AMVETS was founded at the end of World War II with the mission of helping service members transition back into civilian life. 70 years later, the core mission hasn’t changed. The organization is based in Lanham, Maryland, about a 20-minute drive from D.C., and also boasts more than 1,400 posts nationwide. Total membership currently stands around 250,000. The only requirements to become a member is either a military ID or an honorable discharge and a small annual fee. The perks of that membership include everything from assistance with applying for VA benefits to help finding employment after the military. AMVETS is also highly active on the Hill, where it lobbies for policy changes that benefit all service members and veterans.

That's what AMVETS is. Here's what it is not: partisan. The decision to march in the inaugural parade was motivated by a belief that veterans should be represented on the national stage at a pivotal moment in American history. In the weeks leading up to the inauguration, the group’s leadership — a mix of veterans young and old — calculated the risk of participating in the parade and concluded that people would ultimately see the wisdom in their decision to march.

“We wanted to be in the parade out of respect for the office of commander-in-chief,” said Hoellwarth, “and also to raise awareness of veterans issues. It was important to us. Now it’s been misinterpreted as partisan support for the president’s political party or political ideology.”

I embedded with AMVETS during the march, hoping to chronicle what Trump promised would be the largest inaugural celebration our country had ever seen, but which, in my opinion, turned out to be a bit of a flop. As we waited hours in the rain for the parade to resume — for the route to become “safe enough for the children,” as a police officer put it — it became readily apparent that the organization’s leadership is not politically aligned. For every person in the group who was eagerly awaiting the moment we’d pass by the reviewing stand so they could proudly salute the new commander-in-chief, there was someone else cracking jokes about Trump’s reality TV-inspired approach to politics.

Members of Girl Scouts of America prepare to step off for the inauguration parade in DC. Jan 20., 2016Photo by Adam Linehan

One member, an Army veteran, told me his teenage daughter had plans to participate in the Women’s March the following day. Despite being a Trump supporter himself, he was proud. “I’m glad they’re thinking,” he said. “Guys like me get Trump, but not everyone does.”

While people across the country are sharpening their knives, convinced that we’re in the throes of an ideological battle not just between Republicans and Democrats, but right and wrong, veterans organizations like AMVETS are in a unique position to demonstrate how people with different, even opposing, political convictions can work together to improve society. Because if you’ve ever served in the military you’ve had the privilege — and it is a privilege, especially now — of knowing that politics are, or can be, just a small piece of the human equation, that it’s possible for liberals and conservatives to get along. Which brings us back to the news at hand.

AMVETS Membership Director Harry Neal puffs on a cigar as he waits for the inaugural parade to resume. Jan. 20, 2016Photo by Adam Linehan

On Jan. 24, four days after AMVETS marched proudly in the inaugural parade down sparsely populated streets that would fill up the next day with hundreds of thousands of people protesting the new administration, and five days after the organization hosted a breakfast for 43 Medal of Honor recipients at the Renaissance Hotel in downtown D.C., a person or a group of people snuck into the parking lot of the AMVETS headquarters building in Lanham and spread hundreds of nails and screws in rows across the asphalt. If their goal was to deliver a threatening message, they succeeded. And if their goal was to throw a wrench in an operation that provides a number of vital services for veterans, they succeeded in that regard, too.

“I think they’re just trying to express their political dissatisfaction, but they’re doing it in a very unproductive way,” Hoellwarth said. “I can’t imagine what they were trying to accomplish except for letting us know that they’re angry. But I’ll tell you what, they caused thousands of dollars in damage and they stopped the AMVETS career center box truck, which is for veteran job placement. It’s supposed to be on the road helping veterans get jobs. That’s not happening right now. They accomplished that.”