Should Veterans With PTSD Be Exempt From The Death Penalty?

In 2009, Marine veteran John Thuesen broke into his ex-girlfriend's home, then shot and killed her and her brother. Texas … Continued 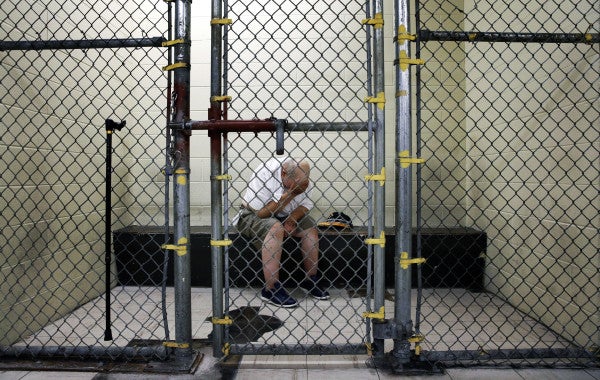 In 2009, Marine veteran John Thuesen broke into his ex-girlfriend's home, then shot and killed her and her brother. Texas convicted him and sentenced him to death. Thuesen was undeniably involved in combat operations in Iraq. It’s reasonably possible that his post-traumatic stress disorder was not adequately diagnosed by the Veterans Health Administration.

Should that keep him off death row? Some say it should.

Related: How a different kind of criminal court saved this Marine veteran »

Movies and television sometimes portray insanity or mental illness as a guaranteed get-out-of-jail-free card, but it’s actually rarely employed and even more rarely successful. In order to get off by reason of insanity, the defense typically has to prove that the defendant was incapable of knowing right from wrong. That requires a degree of mental defect that is severe, rare, and hard to prove. Even if someone does “get off” by pleading insanity, it often means spending more time in a mental institution than one would have spent in prison.

But that’s not what we’re talking about here. Advocates for Thuesen aren’t claiming he wasn’t responsible for his actions, just that his PTSD lessened his culpability to a degree that makes him undeserving of the death penalty. They argue that combat-related PTSD should play a key role in the sentencing phase. The result of this argument could affect the fates of an estimated 300 veterans on death row in the United States, according to the Death Penalty Information Center.

The question of whether the death penalty itself is a just punishment is a much broader question. Nevertheless, it represents the most severe sentence a court can give in those states that allow it. The severity and irrevocable nature of the death penalty means that it needs to be given with utmost care and deliberation. In those cases where special circumstances exist due to the nature of the perpetrator, the justice system needs to take notice. But is military service such a circumstance?

In particular, some PTSD advocates claim that such a punishment is not warranted for veterans due to the effects of military service in combat. For example, Anthony Giardino, in the Fordham Law Review, argues that combat-related PTSD is separate and distinct from any other type of PTSD because “combat veterans would not have service-related PTSD or TBI but for government action in the form of training them to kill and sending them to war.” Giardino, among others, calls for a categorical exclusion from the death penalty for those suffering from combat-related PTSD and TBI, much like those given to juveniles and people with an intellectual disability.

While PTSD and TBI are likely more common among veterans than the general population, they are by no means unique to veterans. The fact that a veteran’s PTSD was likely incurred during combat service makes it tragic, but not necessarily more deserving of accommodation than someone else’s. A psychological trauma or brain injury is what it is, regardless of cause. Is PTSD resulting from a rape, for example, less relevant than that from a firefight? Is TBI from a car accident medically different from that due to an IED? Those sound like decisions that need to be made on a case-by-case basis with specific medical evidence. That’s why there is already a mechanism during the penalty phase for a defendant to present evidence of such mitigation.

Making a special categorical exclusion for combat PTSD infantilizes veterans. A special category, be it by judicial precedent or legislation, for combat PTSD or TBI might benefit a few convicted murderers, but it would further stigmatize millions of law-abiding veterans. These stereotypes are exactly why veterans are often discriminated against. The idea that somehow veterans are on a hair trigger, ready to lash out against anyone who causes them emotional distress is the foundation of so many of the misconceptions about vets.

Some veterans suffered mental wounds from their military experience. Some of those wounds may indeed warrant consideration by courts. The extent to which that affects the degree of culpability varies from case to case. Veterans are generally some of the most outstanding members of society, but just like any other large group of people, some commit major crimes, such as murder.

In certain cases, mental health issues should be a mitigating factor when determining sentencing for a crime, whether it’s a capital case or not. In others, it shouldn’t. It’s up to the defense to establish that through testimony and medical evidence.

Military service merits respect, but not a pass for brutal crimes.