Hundreds of veterans and their families who have spent eight years in federal court trying to prove that burn pits... 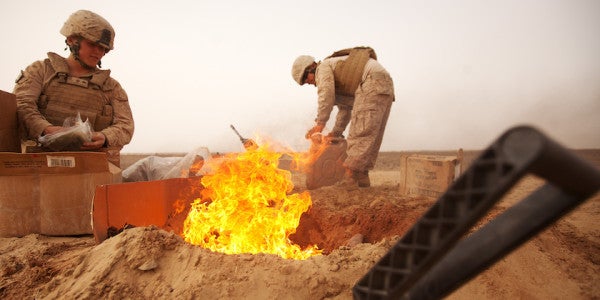 Hundreds of veterans and their families who have spent eight years in federal court trying to prove that burn pits in Iraq and Afghanistan made U.S. troops sick are worried they’ll hit a legal dead end if a Maryland judge decides the company that ran the smoke-belching disposal sites can’t be sued because it was working on behalf of the government.

“It’s been a living hell, emotionally, financially and physically,” said Rosie Torres, whose husband, LeRoy, a former Army Reserve captain, was diagnosed with a debilitating, progressive lung disease after he returned home to Texas following a deployment to Iraq. “It is the war that followed us home.”

For Dina McKenna, the case represents hope for long-delayed justice from a military contractor. The widow, who now lives in Tennessee, initially survived on charitable donations until Veterans Affairs benefits kicked in after her 41-year-old husband, former Army Sgt. William McKenna, died in 2010 from a rare form of T-cell lymphoma. He had served in Iraq.

“What do I want out of this lawsuit? I want the rules changed so soldiers don’t go through this again. I want to see money distributed to families who lost their homes —because their spouse suffered or is suffering,” McKenna said.

Torres and McKenna are among 735 plaintiffs waiting for U.S. District Court Judge Roger W. Titus to decide whether to let a massive lawsuit continue against Houston-based KBR Inc., a defense contractor and former subsidiary of Halliburton that ran burn pits to dispose of waste on U.S. bases in Iraq and Afghanistan.

KBR has asked the judge to dismiss the burn pit case — a collection of more than 60 individual suits filed in multiple jurisdictions by military family members, veterans or former KBR employees — arguing that the federal courts lack jurisdiction to rule on a military decision to use the burn pits, and as a military contractor, it should be shielded from litigation. The company released a statement June 29 saying its employees operated burn pits in Iraq and Afghanistan “safely and effectively at the direction and under control of the U.S. military.”

“The government’s best scientific and expert opinions have repeatedly concluded there is no link between any long-term health issues and burn pit emissions,” the statement read.

Attorneys for the plaintiffs and defendant wouldn’t comment on the case.

But those suing the company say the smoke from burning millions of pounds of trash in open pits, sometimes around the clock, caused acute and chronic health conditions for those working and living nearby.

KBR burned all kinds of refuse at the sites — some as large as 10 acres —including canvas, wood, paint, batteries, computers, fuel, plastic water bottles, animal carcasses and even human medical waste.

The plaintiffs say they suffer from a range of diseases caused by exposure to the burning: respiratory illnesses, gastrointestinal disorders, neurological problems and cancers. In one Washington, D.C., class action, a dozen of the plaintiffs have died since the cases were consolidated in October 2009.

Titus, who held a hearing in March, has not said when he will announce his decision on whether the court has jurisdiction. But he tossed the case once before, in 2013, when he agreed with KBR that military contractors should share the same immunity from litigation over war injuries that the U.S. government has.

The Fourth Circuit Court of Appeals overturned Titus’s decision in 2014, saying more evidence was needed to determine whether KBR had met its contract conditions. KBR unsuccessfully petitioned the U.S. Supreme Court to hear the case in 2015, sending it back to Titus.

Eight years in, the plaintiffs remain determined to see the case to its end.

Jill Wilkins’ husband, Air Force Maj. Kevin Wilkins, died in 2008 at age 51 of glioblastoma, a type of brain cancer. Wilkins receives lifelong benefits because her husband was on active duty when he died, but other plaintiffs are without compensation or health care, she said.

“It would be extremely sad if the case is dismissed,” Wilkins said. “There are a lot of people looking for help from the (Department of Veterans Affairs) and not getting it.”

The debate over the potential health effects of the burn pits goes back almost to the start of their use on U.S. bases.

KBR began managing waste operations in Iraq and Afghanistan in 2003. The company took over trash burning from the U.S. military, according to retired Army Lt. Gen. Ricardo Sanchez, the former coalition ground forces commander, who testified as a witness for KBR during the March hearing.

KBR ran the operations under a contract with the Defense Contract Management Agency. In court papers, the company said the Defense Department authorized continued use of the pits.

But James Leidle, an attorney for the plaintiffs, noted in court that by 2004, the department had purchased 41 incinerators for U.S. bases in Iraq, though a contract dispute delayed their construction.

As early as 2006, Air Force Lt. Col. Darrin Curtis warned senior Air Force officials that the burn pit at Joint Base Balad, 40 miles north of Baghdad, presented an acute health hazard and “the possibility for chronic health hazards associated with the smoke.”

But a 2008 U.S. Army Center for Health Promotion and Preventive Medicine report contradicted that, saying that an air sampling from Balad showed exposure levels were not “routinely above” guidelines and weren’t likely to cause short-term health effects. Results also indicated an “acceptable” health risk for both cancer and non-cancerous diseases long-term.

By 2010, 39 incinerators had been installed in Iraq but burn pits remained in use at small outposts and in Afghanistan. In a review conducted for the VA in 2011, the National Academies of Sciences, Engineering and Medicine found inadequate or insufficient evidence to link burn pit exposure to cancer, respiratory disease or neurological diseases.

At the insistence of Congress, the VA created the Airborne Hazards and Burn Pit Registry in 2014 to keep track of veterans’ claims of exposure. Nearly 105,000 veterans have joined.

But Bill McKenna’s not on the list. Neither is his widow. Dina McKenna said she’s not allowed to register as a family member of a deceased veteran.