Vietnam Veterans of America has filed a lawsuit against the Defense Department, alleging its website containing veterans’ and servicemembers’ records... 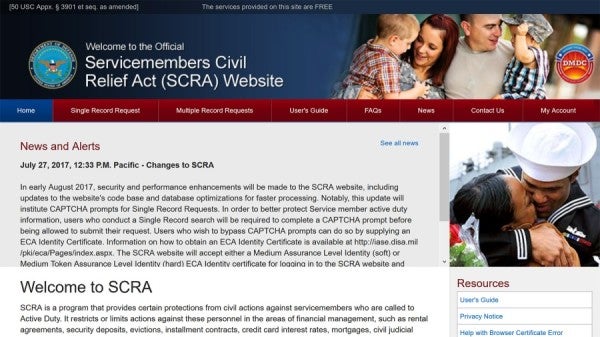 Vietnam Veterans of America has filed a lawsuit against the Defense Department, alleging its website containing veterans’ and servicemembers’ records violates privacy rights and leaves them susceptible to fraud.

The site, scra.dmdc.osd.mil, is a searchable database of servicemembers’ active-duty status, intended to be used by banks and other institutions to determine whether a servicemember is on active duty and thus entitled to certain protections under the Servicemembers Civil Relief Act, such as protection from eviction. But Vietnam Veterans of America contends the website is poorly protected and allows access to “anybody at all, anonymously, for any purpose,” according to a prepared statement from the group. They argue it violates the Privacy Act.

The Pentagon does not comment on ongoing litigation, said Laura Ochoa, a Pentagon spokeswoman.

The website is searchable using a veteran’s or servicemember’s last name and birthday or social security number. It contains troops’ dates of active-duty service, future dates of active duty and other service information.

“Veterans are disproportionately targeted by scammers and identity thieves,” Vietnam Veterans of America President John Rowan said in a prepared statement. “[The Defense Department] is fueling the problem by leaving veterans’ private information easily accessible on the internet. [The Defense Department] has refused to properly secure veterans’ information. We are asking a court to order them to do so.”

Vietnam Veterans of America filed the complaint Tuesday in U.S. District Court in the Western District of New York. The group is being represented by three student attorneys at the University of Buffalo School of Law and Jonathan Manes, an assistant clinical professor at the law school.

The lawsuit names one Air Force veteran, Thomas Barden, who was targeted by scammers who used information from the Defense Department website, according to the complaint. Scammers used details of Barden’s military service from the site to gain his trust and con him into purchasing fraudulent computer software. Later, they took control of Barden’s computer, locking him out of his files until he paid a ransom. Barden refused to pay.

The complaint states Barden’s situation “is no aberration.”

“We expect the military to protect our private information, not to leave it unsecured,” Barden said in a statement. “The government should not be giving con artists easy access to information they can use to scam veterans like me.”

Vietnam Veterans of America is asking the Defense Department be ordered to implement security restrictions on the website and award at least $1,000 in damages to Barden, among other things.