Editor’s Note: This article by Richard Sisk originally appeared on Military.com, the premier source of information for the military and veteran community. Republican... 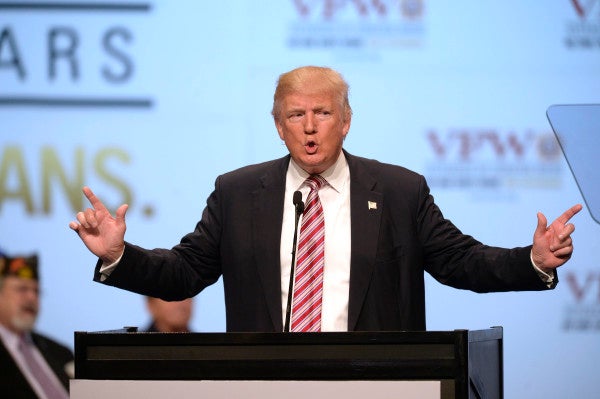 Accompanied by vice presidential running mate Gov. Mike Pence, an Indiana Republican, Trump said that in his administration “veterans will have the right to go to a VA facility or the right to go to see a private doctor or the clinic of their choice. There'll be no more five-day waits in line.”

Trump also said he would set up a White House hotline to hear the “valid complaints” of veterans and would personally intervene if the vet wasn't satisfied.

“This could keep me very busy at night, folks,” he said. “This could take the place of Twitter.”

Trump appeared a day after Clinton, the presumptive Democratic nominee, spoke to the VFW and said she would oppose efforts to privatize VA health care. The VFW audience gave Clinton a polite but muted reception while Trump was greeted enthusiastically with chants of his “Make America Great Again” slogan.

Trump spent much of his 25-minute address attacking Clinton and stressing the themes of his campaign speech on immigration, refugees and defeating the Islamic State of Iraq and Syria, or ISIS.

Clinton never mentioned Trump's name at the VFW. Trump took a different approach, saying, “You know her name — crooked Hillary Clinton. And believe me folks, she is crooked.” Some in the audience shouted “Lock her up!” a frequent cry heard at last week's Republican National Convention last week in Cleveland.

Trump said he would eliminate waste, fraud and abuse at the VA while corruption at the department in a Clinton administration would be “swept under the rug.”

Before Trump took the stage,VA Secretary Bob McDonald made an impassioned defense of the department and argued that its transformation was “well underway.”