Editor's Note: This article originally appeared on Business Insider. Russia fired on two Ukrainian vessels and rammed a third during... 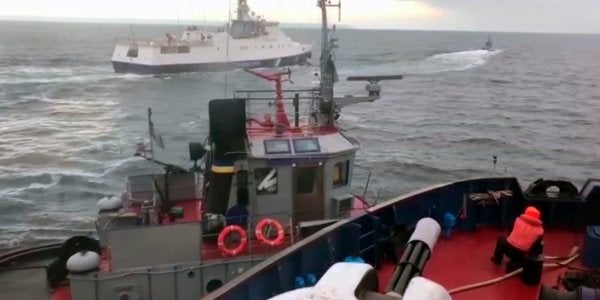 Russia fired on two Ukrainian vessels and rammed a third during a confrontation in the Sea of Azov this past weekend that left a handful of Ukrainian sailors injured.

Video footage from the clash obtained and released by Arsen Avakov, the Ukrainian minister of internal affairs, shows the exact moment a suspected Russian ship slams into the side of a Ukrainian tugboat in the shallow waters between Russia and the Ukraine.

The tugboat was escorting two Ukrainian naval vessels from Odessa on the Black Sea to the port city of Mariupol on the Sea of Azoz via the Kerch Strait when the incident occurred.

The Russians seized the three Ukrainian ships — the tugboat Yany Kapuand the two gunboats, the Berdiansk and Nikopol, according to the online publication The War Zone.

Moscow insists that its actions were necessary after the three ships entered Russian waters without authorization. Kiev claims that it gave the Russians advanced notice that its ships would be in the area.

Russia and Ukraine signed a treaty in 2003 to share the Sea of Azov as well as the adjacent Kerch Strait. Russia has increased its military presence in the area, regularly stopping Ukrainian ships for inspections, the Associated Press reports.

The Russians further assert that the Ukrainian ships did not respond to warnings and were engaging in aggressive maneuvers. Ukraine, however, argues that this was an unprovoked act of Russian aggression.

“Weapons were used with the aim of forcibly stopping the Ukrainian warships. As a result, all three Ukrainian naval vessels were seized in the Russian Federation's territorial waters in the Black Sea,” Russia's Federal Security Service (FSB) said in a statement, according to Voice of America.

“Russian coastguard vessels … carried out openly aggressive actions against Ukrainian navy ships,” Ukrainian authorities said in a statement, revealing that the tugboat's engine, hull, railings, and lifeboat were damaged in the incident.

Following the confrontation, Russia blocked the Kerch Strait, the only passageway between the Black Sea and the Sea of Azov, with a tanker. The Ukraine has long warned that Russia would eventually blockade the strait, a critical thoroughfare for the country.

The recent incident marks a significant escalation in tensions, which began rising with Russia's annexation of Crimea in 2014.