North Korean troops violated the 1953 armistice as they shot over the border and in one case crossed it themselves... 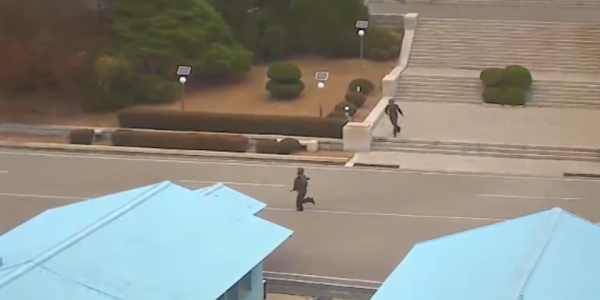 North Korean troops violated the 1953 armistice as they shot over the border and in one case crossed it themselves while chasing a fellow soldier who was making a dash to the South, the United Nations Command said Wednesday.

The allegation came as the UNC released video showing the dramatic defection by the North Korean soldier, who drove a military jeep to the line that divides the peninsula, then ran across it under a barrage of gunfire.

The footage, which was captured by closed-circuit television cameras at the truce village of Panmunjom, shows a vehicle racing on a road until it gets stuck. The defector then jumps out and runs south across a leaf-covered field.

Other North Korean soldiers are seen running from a guard post and the steps of their main reception building in the Joint Security Area, the only point in the Demilitarized Zone where the two sides face each other.

Army Col. Chad Carroll, spokesman for the UNC, said the North Korean army fired across the Military Demarcation Line. He also pointed to a clip he said shows one of the North Koreans briefly crossing the MDL before returning to his side.

“The [North Korean army] violated the armistice,” he said during a press conference at South Korea’s defense ministry, referring to the 1953 truce that ended three years of fighting but left the two Koreas technically in a state of war.

The soldier, who was hit at least five times, was severely wounded by the gunfire during his Nov. 13 defection.

He remains hospitalized but has regained consciousness after a series of operations, a government official was quoted as saying by the Yonhap News Agency.

He asked to watch television, and medical staff reportedly hung a South Korean flag in his room at the Ajou University Hospital in Suwon, south of Seoul.

“For the soldier's psychological comfort, we've shown the patient South Korean movies and he has recovered enough to watch television,” the official said.

South Korean military officials have not yet visited or identified the soldier, Yonhap said.

The UNC had planned to release the video last week but announced Friday it would wait until the investigation was complete.