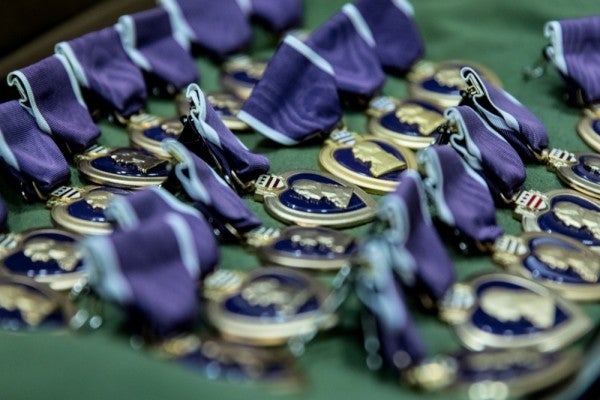 “They were protesting and calling us baby killers and stuff like that,” the Salisbury Township resident said Monday.

And so, he didn't care to retrieve the military medals he was awarded for his service in the Marines, where earned the rank of corporal.

“You just didn't talk about it,” he said.

Last year, his wife Catherine told him he should try to get those medals so his two sons could see what he did for his country. Attitudes toward Vietnam veterans have changed, she figured.

So, Botch contacted U.S. Rep. Susan Wild's office, one of the first times a constituent had reached out to the first-term Lehigh Valley congresswoman for help retrieving military medals. On Monday, Wild held a ceremony to give Botch his Purple Heart and several other medals. Ronald, 71, and Catherine, 69, attended with their sons, James, 36 and John, 33.

Wild shared Botch's story: He enlisted in the Marine Corps when he was 19. In 1968, he was deployed to Vietnam. That same year, he was wounded when the truck he was in hit a land mine, for which he received the Purple Heart. The medal, the oldest military award still given to service members, is awarded to those wounded while serving in the armed services.

” I am very proud of you,” Wild told Botch during the event. “I'm sure your family is as well.”

Catherine hopes that more veterans will step forward and claim their service medals.

“They need to acknowledge to themselves that what they did was something special, especially ones that hide it so much,” she said. “And they need to know and recognize that that was a gift that I gave to the country.”

Botch had his two sons in mind Monday.

“The most important thing is they know what I went through and they think I deserved it,” he said.