To play Pokémon Go, the wildly popular augmented reality game, players must scour the Earth catching magical creatures that they... 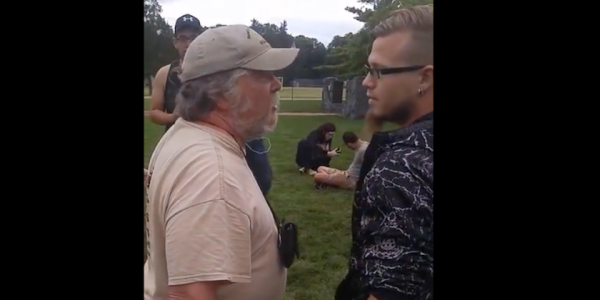 To play Pokémon Go, the wildly popular augmented reality game, players must scour the Earth catching magical creatures that they then use to wage battles with other players in virtual arenas. But during a recent expedition through the little town of Winona, Minnesota, several Pokémon catchers found themselves waging a real-life battle instead. Fed up with hordes of teenagers playing the game in the town’s Veterans Memorial Park, a group of local vets decided to take matters into their own hands and try to force the players off the grounds. The ensuing confrontation was filmed.

In the video, a man identified as Bill Reed, a Vietnam veteran and the chairman of the Veterans Memorial Park committee, can be seen unleashing a torrent of accusations and threats at the young players, who retaliate with a potent mixture of sarcasm and teenage nonchalance. And because this is 2016, they made sure to document everything, strategically including the fact that Reed is the owner of a local tree services company. Then they uploaded it to the internet under the title, “Crazy vet vandalizes and threatens me and other Pokémon Go players!”

The video, which was uploaded by YouTube user Brxndon, has been viewed more than a million times on YouTube and has ignited a fierce online debate. It has also forced local city officials to figure out how to deal with a game that encourages players to venture into areas regarded by some as hallowed ground. “These are like fucking gravestones right there,” Reed shouts, pointing to a nearby granite monument. “No, it’s not,” the cameraman retorts, at which point Reed knocks the camera out of his hand.

The video also raises questions about whether or not veterans have a responsibility to respect the individual rights they took an oath to defend when they joined the military. According to CBS Minnesota, those rights came under threat following the ordeal when the Winona city council considered banning a range of activities in the park. That effort was quickly reined in by the city’s mayor, Mark Peterson, who, in an interview with CBS, said, “I personally have some concerns about some of the language in there that appears to restrict freedom of speech and assembly. That’s something that all these people fought for.”

The mayor’s remarks echo similar ones made by some of the Pokémon Go players appearing in the viral video. “You fought for right of speech!” yells one of the players. A minute later, beyond earshot of Reeds and his crew, the cameraman says, “They’re getting really violent, these veterans are.” He’s not exaggerating: At one point, Reed can be seen tackling a canopy that apparently belonged to the players. At another, he tells the teenage cameraman that he’s going to knock him out. The cameraman later told the local news affiliate that he didn’t want to reveal his last name because he had already received death threats as a result of the video.

The city is taking measures to keep the peace in Veterans Memorial park, which has since been renamed Veterans Memorial. While Pokémon Go players are still allowed to play in the park, tents and hammocks — dwellings apparently favored by the nomadic Pokémon Go tribe — have been banned. But the knife cut both ways.

Reed was arrested and charged with disorderly conduct and destruction of property. In an interview with a local news station, Reed admitted that he lost his cool but stood his ground, saying, “I don’t regret it for a minute. I’m glad I did it. I’ve got the support. Anyone could have done it. I just happened to be the guy to do it.”

Reed’s company, however, may be suffering as a result of the YouTube video. Over the past week, the Google Reviews page for Reed’s Tree Services has been barraged with angry comments, most — if not all — of them referencing the confrontation. “I saw what the owners did at the parks, that was beyond professional,” wrote one commenter. Another wrote: “While I appreciate your service. You can’t go around pushing pregnant and acting like a child to get your way.”