Ken Dierdorf wanted nothing more than to fly in a Bell UH-1 Iroquois “Huey” one last time with the men... 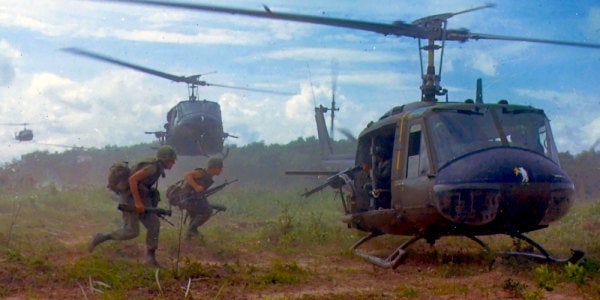 Ken Dierdorf wanted nothing more than to fly in a Bell UH-1 Iroquois “Huey” one last time with the men he fought alongside during his year-long tour in Vietnam.

And while his debilitating Amyotrophic Lateral Sclerosis, ALS, prevented him from flying with them at Saturday’s Terre Haute Air Show, Dierdorf’s wife, Kim, said that hasn’t stopped him from talking about the great joy it brought him just to sit with his Army buddies before takeoff.

“It’s like when people talk about a bucket list and the things they want to do, I think this was the last thing on his list,” Kim said.

Diagnosed with ALS in 2010, Ken’s health had been in steady decline, eventually getting to the point two years ago that he needed a respirator full time to aid his breathing.

As his last hurrah, the Dierdorf’s reached out to the Visiting Nurse Association and Hospice of the Wabash Valley earlier this year to see if they could facilitate a Huey ride for the Dirty Half Dozen, a group of Vietnam veterans comprised of Ken and his closest friends.

When Julie Rehmel and the staff at VNA Hospice Care were able to arrange a flight with one of the Army Aviation Heritage Foundation’s Hueys at the air show, Ken cried, Kim remembers.

And even though he was unable to ride, Kim says it was seeing the other members of the Dirty Half Dozen fly that made his last wish come true.

“Ken said it didn’t bother him that he didn’t get to fly,” Kim said. “He said all he cared about was being able to sit with them on the Huey again and have that time with them.

“He talked about it non-stop since Saturday. And even though I know it took a lot out of him, I think that because it was his last hurrah that he really, really wanted to do, I think that once that was able to happen for him he knew he didn’t have to fight any longer.”

Although none of the other members of the Dirty Half Dozen expected to get a call telling them one of their best friends died Wednesday, each knew that Saturday was likely the last time the crew would be together.

“We all kind of knew that Saturday might be the last time we see Ken,” said Tom Owen, 68, of Yellville, Arkansas. “I think that’s what makes the time we had together this past weekend even more special.”

Gil Edgington said seeing Ken get his last wish fulfilled is fitting for a man he says was always so kind and full of life.

“It was all in God’s plan,” said Edgington, 69, of Florence, Kentucky. “It meant so much to us, in his passing, that while it’s a shock we know that he’s not suffering anymore.

“It’s just difficult because we served in Vietnam with Ken, the six of us, for 11 of our 12 months there. And being in combat together you form a bond with those guys like no other because you watch each others’ backs, live together and everything. It’s such a special thing we have.”

Members of the Dirty Half Dozen said they’d remember Ken most for his unwavering sense of humor, with each telling story after story of Ken’s ability to find humor in almost anything.

“He was always the funny guy,” Owen said. “He was always trying to play tricks on us all the time. We would sit at the dinner table and he would take straws and shoot the straw wrapper at you all through the night. That’s just the kind of guy he was.”

Joe Lewis, 68, of Byhalia, Mississippi, said no matter how bad Ken was feeling on a particular day, whenever Lewis would call, Ken would still shoot back with a joke.

“I would call him up and ask him how he was doing, and it didn’t matter if it was when he was in good health after we first reconnected or when he was sick and could barely talk on the phone, I would ask how he was doing and he would always say, ‘Just as mean I as ever was, just taking names as I go along,’” Lewis said.

“But that’s how he was. And I will always remember him that way. I will remember his positivity and the way he always fought to make the best of his health.”

Kim said she is still making arrangements for Ken’s visitation and service, but each member of the Half Dozen said they will do all in their power to make it back to Terre Haute for their brother.