Vietnam Veteran Gets His Dying Wish: To Go Fishing One Last Time

Connie Willhite had two requests as he entered hospice care: baptism and fishing. The Soperton resident, who served in the … Continued 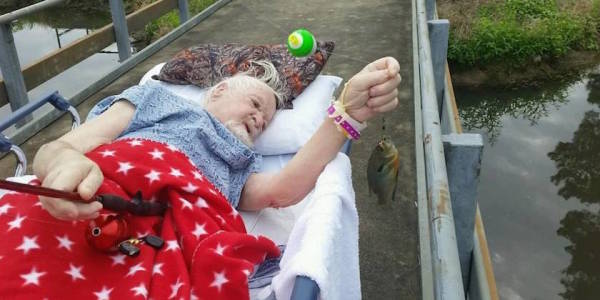 Connie Willhite had two requests as he entered hospice care: baptism and fishing.

The Soperton resident, who served in the Navy during the Vietnam War, told the staff at the Hospice Care Unit at Dublin’s Carl Vinson VA Medical Center that those two things were important to him during his last days.

“There’s nothing like fishing. Even when they’re not biting, it’s still a good day to be outside,” Willhite said, according to a hospital spokesman. “I know I’m dying and the cancer is going to get me, but as long as I can go, I want to fish.”

Chaplain Sam Scaggs was brought in to assist with the baptism, which took place inside Willhite’s room as his family and hospital workers looked on. For the other wish, the staff would have to get more creative.

On Thursday, Willhite, in his bed, was wheeled out to Lake Leisure, adjacent to the hospital.

There he caught his last fish — a hand-sized bream.

“I’ll never forget the look on his face. After all the preparation, we had no idea if he would actually catch anything,” Senters said.

“Seeing Mr. Willhite achieve success in his final days was more than gratifying, it’s a memory that I’ll always cherish. Moments like that make me proud to be in social work and to serve veterans.”