When the captain of the world's largest Viking warship is accusing you of rudeness, it might be time to check... 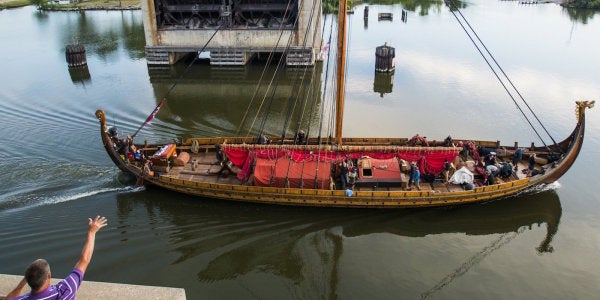 When the captain of the world's largest Viking warship is accusing you of rudeness, it might be time to check your manners.

That's the unmistakable message for U.S. authorities from Bjorn Ahlander, captain of the Draken Harald Harfagre, a fearsome historic 115-foot wooden longship that crossed the Atlantic from Norway and is now bearing down on Chicago.

Ahlander and his crew say they are upset that they were invited to make the harrowing three-month voyage to compete in next week's Tall Ships festival at Navy Pier, only to be told once they arrived in U.S. waters that they could not sail on the Great Lakes without a $400-an-hour licensed pilot.

“We find it a little impolite,” Ahlander told the Tribune from a bar in Alpena, Mich., where he and his crew were relaxing Wednesday night. “It will cost us about $400,000. We are not making any money, and that is a lot for us.”

But Todd Haviland, director of pilotage for the Great Lakes for the U.S. Coast Guard, isn't having it. He said Ahlander and his crew were told in the fall, long before they set out on their epic voyage, that federal laws required them to pay the pilot fees. “They even asked for an estimate so they knew how much to charge their crew,” Haviland said.

Patricia Lock, a director with Tall Ships America, agreed that the Norwegians were told about the fees but said there was “a misunderstanding and maybe a little wishful thinking” after Canadian Great Lakes officials told the crew they would not need to hire a pilot in Canadian waters.

Still, what Ahlander described as a shock expense has spurred a frantic fundraising effort by the Sons of Norway heritage group, which has so far cobbled together more than $61,000 — enough to get the Draken to Chicago but not for it to race once it arrives, as the crew had planned.

It remains unclear whether planned stops in Green Bay and Duluth, Minn., will go ahead, as the high cost of pilots means the crew must now rush from port to port as fast as possible to reduce pilot fees. The Draken, described on its website as “world's largest Viking ship sailing in modern times,” is forced to pay the same high pilot fees as much larger commercial tankers, Ahlander said.

“The American people we have met have been very, very welcoming,” Ahlander said, adding that the fees mean fewer stops and, as a result, fewer people will get to see the replica ship or learn about the trans-Atlantic voyages that Vikings made hundreds of years before Christopher Columbus.

After surviving rough seas around Iceland — the Draken has an open deck, and the crew sleeps in shifts in a tent — sailing on Lake Michigan has been “very warm and not that challenging, but you should always have respect for any water,” the captain added.

“We have no problem with the pilots. They are just doing their job and they have been very nice and one even brought a bottle of whiskey onboard.”

The softly-spoken Ahlander joked that while his ship is historically accurate, the behavior of his crew is not. They do not drink on board and “we try to behave,” he said.