U.S. Army Lieutenant Colonel Alexander Vindman should not fear retaliation over his testimony to the U.S. Congress in its impeachment inquiry into President Donald Trump, Defense Secretary Mark Esper said on Monday 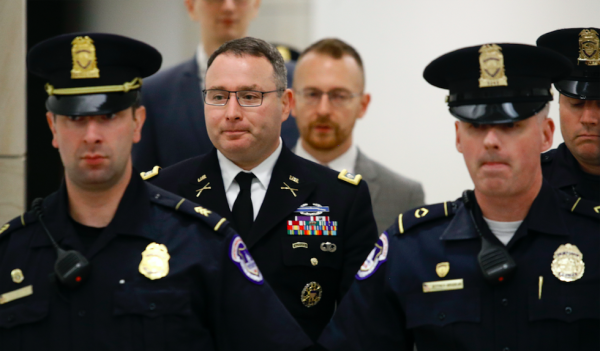 Vindman, now detailed to the White House National Security Council, has been targeted by Trump following his Oct. 29 congressional testimony. Trump tweeted that Vindman was a “Never Trumper witness,” raising questions about potential fallout on his military career.

“He shouldn't have any fear of retaliation,” Esper told a small group of reporters during a flight to New York, adding that he had reinforced the “no retaliation” message in a conversation with the secretary of the Army.

Vindman was among the U.S. officials in the White House monitoring Trump's call on July 25 with Ukraine President Volodymyr Zelenskiy, a main focus of the impeachment probe in the Democratic-led U.S. House of Representatives.

According to a transcript of his testimony, Vindman said he had no doubt that Trump demanded that Ukraine investigate Democratic political rival Joe Biden in return for an Oval Office visit for the Ukrainian leader.

“This was about getting a White House meeting,” Vindman said in his testimony. “It was a demand for him to…fulfill this particular prerequisite.”

Vindman told lawmakers that he believed ties between the United States and Ukraine have been damaged by the administration's actions.

“It undercuts U.S. resolve to support Ukraine and certainly puts a question into their mind whether they in fact have U.S. support,” Vindman said.

Democrats have argued that Trump abused his power in pressing a vulnerable U.S. ally to carry out investigations that would benefit Trump politically.

Biden is a leading contender for the Democratic nomination to face the Republican president in the 2020 election. His son Hunter Biden served on the board of a Ukrainian energy company called Burisma.

One U.S. official, speaking on condition of anonymity, said Vindman would not be pulled early from his previously scheduled detail to the National Security Council (NSC), after which time he would return to the military.

A person familiar with the matter, who also spoke on condition of anonymity, said Vindman's two-year-long detail to the White House ends in July, at which point he was expected to attend a program at the U.S. Army War College.

The source said Vindman returned to his White House assignment after his testimony and there had been no change in his responsibilities.

Esper, for his part, declined to speculate about when Vindman would return to military ranks. However, he said he supported plans by Trump's national security adviser, Robert O'Brien, to reduce the size of the National Security Council.

The number of NSC policy advisers has trended higher over the past 30 years. President George H.W. Bush had less than 50, Bill Clinton went up to 96, George W. Bush's grew to 136 in his second term, and Barack Obama at one point had 184, according to NSC records.

O'Brien has said he wants to bring the size of the White House agency down to 117 policy advisers from its current strength of about 178. That is about the size the NSC was under the leadership of Condoleezza Rice when she was President George W. Bush's national security adviser during Bush's first term in the early 2000s.