Members of a Virginia Beach-based special warfare unit have been reprimanded for flying a Donald Trump campaign flag from a... 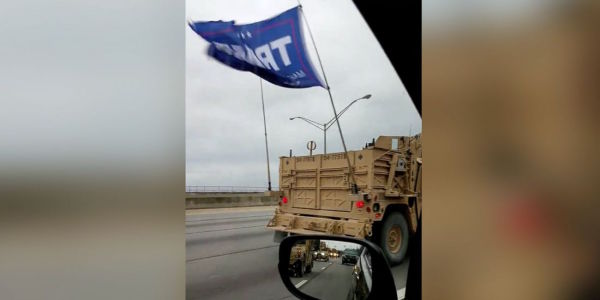 Members of a Virginia Beach-based special warfare unit have been reprimanded for flying a Donald Trump campaign flag from a Humvee during training in Kentucky, a Navy spokeswoman said Tuesday.

Lt. Jacqui Maxwell said in an email that members of Naval Special Warfare Group Two were found to have “violated the spirit and intent” of Defense Department regulations that guide the flying of flags and “the apparent endorsement of political activities” after they were seen flying a blue flag from the lead vehicle in a convoy driving near Fort Knox, Ky., in January.

Images quickly spread across social media and several news outlets, including the Louisville Courier-Journal, picked them up.

The Navy warned service members throughout last year’s primary and general elections against appearing to endorse a political candidate in an official capacity.

Maxwell did not say how many service members were reprimanded or how.

“Administrative corrective measures were taken with each individual based on their respective responsibility,” she wrote Tuesday.