He cheated death after a motorcycle accident left him in a wheelchair for several months. On July 20, a Virginia... 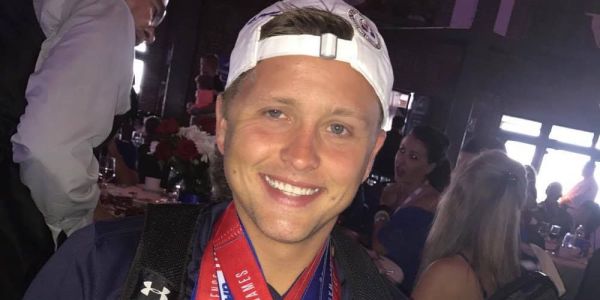 He cheated death after a motorcycle accident left him in a wheelchair for several months.

On July 20, a Virginia Beach Navy veteran told himself he would cheat it once more before he kicked down the door of a burning house to save a man trapped inside.

Damion Hedington, 24, an operations specialist who said he was medically discharged, was on vacation in Saratoga Springs, N.Y., when he learned around 10 a.m. that a neighbor’s home was burning.

Hedington, who retired as a petty officer third class, ran outside with his girlfriend and her grandfather to help.

When they arrived at the front door of a residence about four houses down, it was locked. They could hear people screaming. That’s when Hedington tried to kick down the door.

“I’ve never kicked a door down, and it didn’t come down the first time I kicked it. The second time the door flew open.”

Through thick smoke, Hedington could barely make out a man’s figure standing at the top of the stairs. After removing a dog gate, Hedington grabbed the man by the hips and helped him down. Hedington asked if anyone else was inside. The man, later identified by Saratoga Springs police as 50-year-old Jason Lewin, told him that his wife and eight dogs were trapped.

“When I went up there you couldn’t see anything. It was like a blanket of smoke. I’ve never seen smoke that thick.”

Hedington went back up the stairs two more times, shining his phone flashlight to try to find the woman, but couldn’t find her. Lewin returned to search for his wife, too.

Emergency responders took Lewin to a hospital in Syracuse. As of July 21 he was in critical condition. His wife, Susan Lewin, 52, was pronounced dead at the scene, said Bob Jillson, Saratoga Springs police spokesman. Four dogs died in the fire.

Hedington said adrenaline kicked in before he ran into the house, but mostly it was his instinct to do the right thing, even if it’s a hard thing. It’s why he joined the Navy.

Hedington joined in 2012 and was about to leave for training to become a SEAL when a motorcycle crash in 2015 left him in a coma for three weeks, he said. When he woke up, he couldn’t move his legs for about four months. After a few months in a wheelchair, he started walking. He couldn’t put weight on one leg for about a year. But he was persistent.

“Even in a wheelchair I went to the gym. I was ready to go be a Navy SEAL, and I didn’t want to stop being that way and be heavy set and unhealthy and a downer. I kept working out and when I could walk I tried to run, and finally I got cleared and I started running. I ran every day.”

After 17 surgeries, Hedington competed earlier this summer in the Warrior Games in Chicago, where he won eight medals in swimming, track and field, and archery.