Gifts from world leaders, and items from fallen service members were among what was lost. 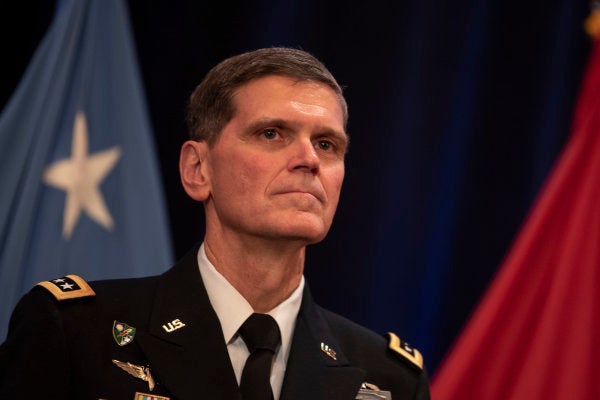 TAMPA — A lawsuit reveals the extent of the loss from a fire two years ago that burned the home of the former U.S. Central Command leader and destroyed its contents, including gifts from world leaders and art and antiques collected by his wife.

Five companies and property managers are named in the suit filed by Joseph Votel, who retired last month as an Army general and CentCom leader after nearly 39 years in the service.

The fire at Votel's MacDill Air Force Base home started after a temporary power line was nailed to an outdoor pole while crews were repairing damage from a water leak in the slab of the home, according to an investigation cited in the lawsuit.

Votel, 61, and his wife Michele had moved out of the home at 8124 Constellation Blvd. during the repair work, but left most of their belongings behind, the lawsuit says.

Military police discovered the fire at about 6 p.m. on Jan. 28, 2017, a Saturday. Fire rescue units from Tampa and St. Petersburg battled the blaze but it swept quickly through the home, the lawsuit says. The investigation was conducted by Tampa Fire Rescue and the U.S. Air Force Office of Special Investigations.

The home and virtually all of its contents were destroyed by fire, or by water and smoke damage, the lawsuit says. No itemized list of losses is provided in the lawsuit, but as CentCom leader for three years, Votel worked with countries in the CentCom region and beyond.

The 20-nation swath of territory stretches from Egypt east to Kazakhstan and includes the scenes of conflict involving U.S. forces during Votel's tenure, including Afghanistan, Iraq and Syria.

The losses to the fire included “irreplaceable and invaluable gifts … from world leaders as well as unique, irreplaceable items of great historical and cultural significance,” the lawsuit says.

They also included “commemorative items from the men and women with whom he served to honor his leadership,” the lawsuit says.

“All of these items had great meaning to plaintiff Joseph Votel and can never be replaced. Some of these people lost their lives in service to our country.”

The fire also destroyed one-of-a kind keepsakes and collectibles from around the world, priceless family heirlooms, and irreplaceable family memorabilia gathered by Michele Votel, who is described as an experienced collector of art and antiques, the lawsuit says.

Other losses, according the lawsuit, include household goods and furnishings and use of a home specially built for the CentCom commander to host receptions for world and military leaders.

In its description of how the fire started, the lawsuit points to two companies that were doing water damage repair — defendants Damage Recovery LLC and Dri-Ez LLC.

Also named as defendants are Fuller Construction Group LLC, the general contractor on the repair and restoration work; AMC East Communities LLC, which leased the home to the Votels; and Michaels Management Services Inc., which oversees housing management at MacDill.

Representatives for Damage Recovery and Fuller Construction could not immediately be reached Friday. Messages left for AMC East Communities and Michaels were not immediately returned. Hurduise Simon, owner of Dri-Ez, said his company has never been to the property.

The lawsuit does not mention mold as one of the problems arising from the water leak at the Votel home, but in an interview just before his retirement Votel told the Tampa Bay Times it's one reason he and his wife had to move out.

Like military families in base housing at MacDill and nationwide, Votel said black mold permeated his home — a concern that has drawn congressional inquiry and pledges of remediation by the private companies that manage the housing.

SEE ALSO: CENTCOM commander Gen. Votel: ISIS will be back