On Monday, Sen. Bernie Sanders urged his supporters to vote for Hillary Clinton in a prime-time speech from the Democratic... 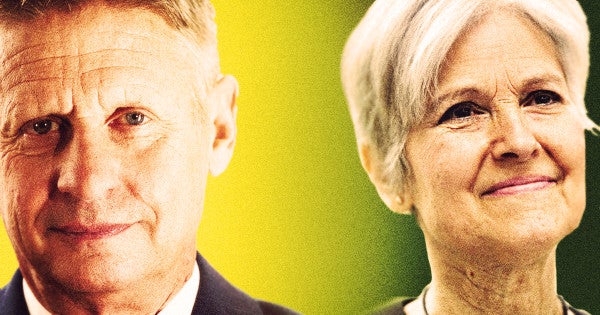 On Monday, Sen. Bernie Sanders urged his supporters to vote for Hillary Clinton in a prime-time speech from the Democratic National Convention stage in Philadelphia. That same day, socialist Seattle City Councilmember Kshama Sawant — who had backed Sanders — told a crowd at a rally across town to continue Sanders’ “political revolution,” not by following his lead, but by voting for Green Party candidate Jill Stein.

Stein has been courting Sanders supporters in Philadelphia while Libertarian presidential candidate Gary Johnson crashed both the Republican and Democratic conventions. In this season of two-party discontent, both Stein and Johnson believe they have a chance to peel off voters and leave their marks on the presidential race.

Johnson believes he will be on all 50 states’ ballots. Stein expects to make most.

Garnering support from 15 percent of voters in national polls qualifies a candidate for the presidential debates. That seems to be the benchmark of legitimacy for which Stein and Johnson are aiming.

Johnson, the former governor of New Mexico, is known for his support (and use) of marijuana, favors small government, a single consumption tax and more protection for civil liberties.

Stein, a physician who became a liberal activist, offers a platform that prioritizes action on climate change and eradicates student debt.

She wants the nation’s energy to be 100 percent clean and renewable by 2030, would like GMOs banned until they’re proven safe (many scientists already believe GMOs are safe) and would set a $15-per-hour federal minimum wage.

Here’s what Stein and Johnson believe (though, like many politicians, they don’t lay out how they’d accomplish all their lofty goals):

—Stein wants to abolish student debt and guarantee tuition-free education from preschool through university education. She wants to “protect our public school systems from privatization and increase federal funding for school.”

—Johnson “believes there is no role for the federal government in education.” He would cut the Department of Education.

—Stein’s platform prioritizes climate change. It calls for a ban on pesticides that she says threaten bees, and would transition the country entirely to renewable energy and end the use of nuclear energy.

—Johnson believes the climate is probably changing and humans are probably contributing. He supports the federal government’s interest in protecting the environment, but believes that should happen by punishing polluters, not intervening in energy markets or subsidizing certain energy sources.

—Stein supports a federal $15 minimum wage, more union rights and tighter regulation of Wall Street. Her platform calls for tax cuts for the poor and middle class, and higher taxes on the wealthy. She hopes to impose a moratorium on foreclosures and evictions.

—Johnson advocates for a free market with small government and limited regulation. He favors tax reform that would create a single consumption tax that is the same rate for all goods and all purchasers. Basic necessities would be covered by a “prebate” — a monthly payment given to every taxpaying household by the government.

—Stein favors a single-payer health care system that would essentially give everyone a form of Medicare.

—Johnson says people ought to be free to marry whomever they want.

—Stein’s platform calls for demilitarized borders and an end to deportations of law-abiding undocumented immigrants.

—Johnson would like work visas to be more easily obtained and to give immigrants a path to citizenship. He notes that immigrants commit fewer crimes than native-born people.

—Stein would like to cut military spending in half and close more than 700 foreign military bases. She would ban drone warfare and would remove U.S. nuclear weapons abroad.

—Johnson considers himself skeptical of foreign intervention. He believes Congress needs to be involved in military decisions.

—Stein supports the Black Lives Matter movement, and an end to police brutality and mass incarceration.

—Johnson believes police shootings are rooted in the drug war, which he would like to end.

—Stein supports gun control measures, and believes the issue ought to be treated as a national public-health emergency.

—Johnson’s support for gun ownership rights aligns with the Libertarian Party platform, which opposes gun restrictions of all kinds.

—Both candidates support the legalization of marijuana and deplore the War on Drugs.