Russia and Turkey may have committed war crimes in Syria, UN says

Russia killed civilians in air strikes in Syria last year while rebels allied to Turkey carried out murder and pillage in Kurdish areas, U.N. investigators said on Monday — actions it said could amount to war crimes by both Moscow and Ankara. 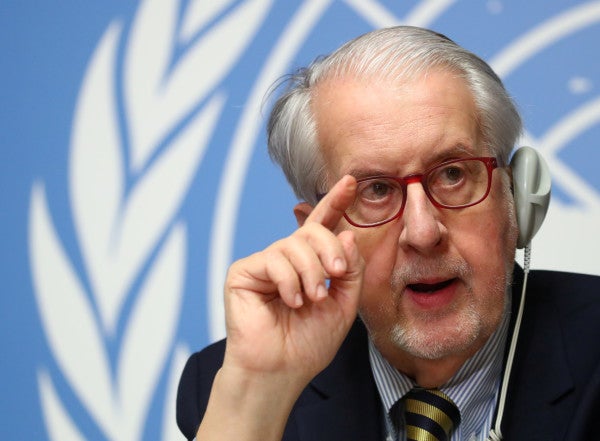 GENEVA (Reuters) – Russia killed civilians in air strikes in Syria last year while rebels allied to Turkey carried out murder and pillage in Kurdish areas, U.N. investigators said on Monday — actions it said could amount to war crimes by both Moscow and Ankara.

A report by a U.N. commission found that Russia — the Syrian government's main ally against rebels and militants — conducted air strikes on a popular market and a camp for displaced people that killed dozens of civilians in July and August.

“In both incidents, the Russian Air Force did not direct the attacks at a specific military objective, amounting to the war crime of launching indiscriminate attacks in civilian areas,” the report said.

It also described abuses by rebels allied to Turkey during an assault on Kurdish-held areas, and said that if the rebels were acting under the control of Turkish military forces, those commanders may be liable for war crimes.

Paulo Pinheiro, the commission's chairman, said it had added names linked to the latest crimes to its confidential list of suspected perpetrators. It has received 200 requests from judicial authorities worldwide for information on crimes committed during Syria's nine-year war, he told a news briefing.

In the report, which covered the period from July 2019 to February 2020, investigators denounced “deliberate” attacks by the Syrian government and allied forces on protected civilian sites, including hospitals and schools.

“There is a war crime of intentionally terrorizing a population to force it to move. We are seeing that picture emerging very clearly for example in Idlib where, because these places are being bombed, people are having to move out,” said panel member Hanny Megally.

Russian-backed Syrian government forces have thrust deep into Idlib province in the far northwest in a campaign to retake the last country's significant rebel pocket. The onslaught has forced around one million civilians to flee.

Up to 10 children have died from the cold in the last weeks due to living in the open at the Turkish border, Megally said.

The U.N. report blamed Russia for an air strike in the city of Maarat al-Numan on July 22 when at least 43 civilians were killed. Two residential buildings and 25 shops were destroyed after at least two Russian planes left Hmeimim air base and circled the area, it said.

Weeks later, an attack on the Haas compound for displaced killed at least 20 people, including eight women and six children, and injured 40 others, the report said.

It also called on Turkey to investigate whether it was responsible for an air strike on a civilian convoy near Ras al Ain that killed 11 people last October. Turkey has denied a role in the strike, which the Syrian Observatory for Human Rights, a monitoring group, said was conducted by Turkish aircraft.