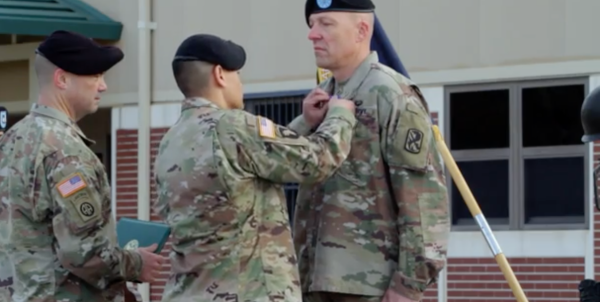 The black cross patch on the right side of Capt. Matthew C. Christensen’s U.S. Army uniform tells a story.

Two years ago, during his previous assignment in Alaska, the chaplain was forced into a situation where he had to act quickly with the fight-or-die instincts of a soldier. It was another place where Army meets religion.

Christensen, a 43-year-old Montana native, defused a potentially deadly situation by unarming a machete-wielding soldier during a suicide attempt that was on the verge of turning into multiple homicides. Tuesday morning at Fort Benning, Christensen, who served as a Lutheran pastor before becoming an active duty chaplain seven years ago, was awarded the Soldier’s Medal, the Army’s highest honor for valor in a non-combat situation.

“Let me tell you the real story, the true story, the story that actually matters,” the 43-year-old said. “The soldier I restrained that night was abused by his own father. He blamed his mother and grandparents for knowing what was happening and never stepping in and stopping the abuse.”

Christensen had walked into the situation when he got a text from the soldier saying he was in distress. The distraught soldier was intoxicated and armed with multiple knives and machetes. Christensen was one of three men in the room when the situation escalated.

The soldier called his mother and grandparents.

“When he put them all on speakerphone and screamed out he had three hostages to kill that night, he was screaming out for help. But for him it was a little bit too late,” Christensen said. “No amount of pleading or counseling could break into his substance-fueled rage.”

The soldier destroyed the room with a machete, took a swing at one soldier, then pinned his roommate against the wall and put the machete to a hostage’s neck.

That is when Christensen acted, rushing the soldier and putting him in a chokehold that caused him to drop the machete. The fight continued before Christensen placed the soldier in a second chokehold and ended the threat.

“Here is where the truth comes in,” Christensen said. “Nothing but fear, and I believe the work of the Holy Spirit, moved me into a position where I could physically control the soldier.”

Lt. Col. Franklin F. Baltazar, commander of the 1-50 Infantry Battalion where Christensen is currently assigned, read the citation that outlined the chaplain’s actions on Feb. 28, 2015.

It is a story of courage and leadership and one Baltazar wanted to better understand, so he sat down with Christensen prior to the ceremony to talk about the ordeal.

“I merely wanted to know what caused him to act when he did and understand why,” Baltazar said. “As we were talking, I found there was a lot more to the story than was covered in the citation.”

In his query, Baltazar discovered something that wasn’t in the official citation. Christensen and the other two were in a room with one door and the distraught soldier stood between his potential victims and that exit.

Maj. Gen. Eric J. Wesley, commander of the Maneuver Center of Excellence at Fort Benning, attended the ceremony. Afterward, he noted the chaplain’s valor, but brought a different perspective.

Christensen answered a third call, and it was demonstrated in his act of bravery, Wesley said.

“He answered the call as a soldier,” the general said. “He was a soldier that day. … Here’s the other thing, if you want a chaplain to have the ear of soldiers, he has to earn it. You have got to manifest the soldier qualities so that soldier respects you. That is what I love to see in chaplains who are soldiers first.”

Wesley then pointed out that the soldiers in the 1-50 Infantry Battalion who were in formation during the ceremony got to see that their chaplain is a “warrior.”

Christensen said he was humbled by the honor, but it is more about the profession of Army chaplains — there are more than 50 on post at Fort Benning — than his personal story.

“The real story, the true story, the story that actually matters is that chaplains go where ever we are needed the most — regardless of the risk,” he said. “Chaplains meet people at their weakest and most vulnerable condition. Sometimes, we provide comfort and counseling. Sometimes, we are called to stand in the way of violence.”