U.S. Air Force A-10 Thunderbolts are back in the Baltics this month, practicing for rough landings on improvised runways as... 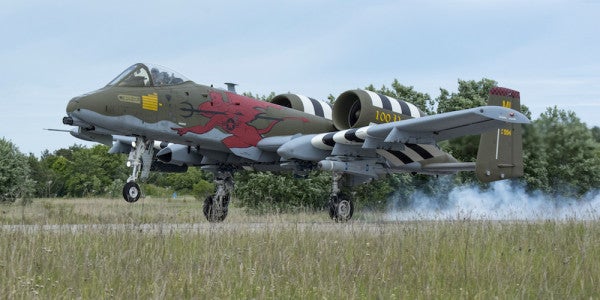 U.S. Air Force A-10 Thunderbolts are back in the Baltics this month, practicing for rough landings on improvised runways as a part of Saber Strike 18, the annual exercise where NATO and partner forces work to improve their ability to operate across Europe and with NATO's forward-deployed battle groups.

In early June, A-10s from the Michigan Air National Guard's 107th Fighter Squadron, based at Selfridge Air National Guard Base, practiced landing and taking off from a rural highway in Latvia and an abandoned runway in Estonia.

During the Cold War, highways were considered an option for fixed-wing aircraft, as standard airstrips were likely to be targeted first in the event of conflict. But the A-10s only recently resumed the exercise.

“The requirement that we've been tasked with to be able to force project into battle spaces where the assumption is that the enemy is going to immediately try to destroy or limit capabilities on known airfields,” said Air Force Maj. David Dennis, the detachment director of operations for the 107th Fighter Squadron.

“So the A-10 has been tasked with being able to forward deploy into areas a little bit more austere,” he added, “whether they're old airfields, riverbeds, old highways, whatever the case may be, so we continue to provide close air support to the guys on the ground.”

The 107th Fighter Squadron is currently deployed to Latvia. Working with members of the 321st Special Tactics Squadron's combat controllers, the 107th's A-10s carried out landings and takeoffs from an abandoned runway in Haapsalu, Estonia, on June 7.

A US Air Force A-10 Thunderbolt II, assigned to the 107th Fighter Squadron from Selfridge, Michigan, practiced landing on an austere runway in Haapsalu, Estonia, during Saber Strike 18, June 7, 2018.US Air National Guard/Staff Sgt. Bobbie Reynolds

The exercise is part of Saber Strike 18, the latest version of a U.S. Army Europe-led training exercise involving NATO countries and partner forces. This year's iteration focuses on improving land- and air-operational capabilities, with the additional goal of training with NATO's enhanced forward presence battle groups.

NATO's enhanced forward presence battle groups have been deployed to Estonia, Latvia, Lithuania, and Poland over the past two years and are made up of units from various NATO member countries. They are still on station in those four countries and now number over 4,500 personnel in total.

“We're landing on Estonian soil, so we have Estonian defense forces here, providing security. We have local fire departments on standby, in case there is some sort of incident,” Dennis said. “So it involves a host of people.”

On a rural highway in northern Estonia, a pilot flies an A-10 Thunderbolt II attached to the 107th Fighter Squadron, Selfridge Air National Guard Base, Mich., from Lielvarde Air Base, Latvia, to practice landings and takeoffs, during the Exercise Saber Strike 18 on June 7, 2018. US Air Force/Master Sgt. David Kujawa

Austere-landing exercises contribute to the goal of providing close air support. “So day five, day six, day ten of the war, the assumption is that the airfields that the Air Force has been operating out of are probably compromised in some manner,” Dennis said.

“So in order to continue to force project, and to continue to drop bombs and protect the troops on the ground, we're going to have to find other suitable means with which we can continue our combat operations,” Dennis added. “So they would literally truck in the bombs, the bullets, all the things they need to, to austere environments, like an old airfield, a highway, whatever have you, so that we can continue to operate and ultimately save lives on the ground.”

The A-10, introduced in the 1970s, was a key component of the NATO's frontline defense during the Cold War. It served as the main antitank platform and was equipped with heavy armaments, like the AGM-65 Maverick missile and a 30 mm Gatling gun, and was heavily armored itself in order withstand ground fire.

A-10 pilots were given a coloring book to help train them to recognize Soviet tanks. The book, filled with deadpan humor and titled “What you always wanted to know about the T-62 but were afraid to ask,” color-coded sections on Soviet vehicles to instruct pilots on which parts to target and which to avoid.

“The point of the article is to highlight for newly assigned pilots the improved vulnerabilities of the tank from a side or rear attack,” Andy Bush, a retired A-10 pilot, told War is Boring in 2014. Bush said he had “no idea who wrote it or where.”

Cold War planners were not optimistic about the A-10's chances in a war. In the 1980s, the Air Force planned to put 68 A-10s at each of six forward operating bases in West Germany. Their estimates assumed a 7% loss rate for each 100 flights, meaning each forward operating base would lose at least 10 A-10s every 24 hours. At that rate, the roughly 700-plane A-10 fleet would be shot down in less than two weeks.

Current tensions with Russia are far from the level seen between the Soviet Union and the West during the Cold War. But the austere-landing exercise and other drills are meant to keep pilots and aircrews sharp and reassure allies.

“Why did we choose Haapsalu over other areas? Inside the country of Estonia, essentially inside the Baltic region … it's part of reassuring our NATO alliances,” Dennis said. “We continue to force-project airplanes, not just the A-10 but other NATO assets, all throughout the Baltic region. So what we have done is we've analyzed different areas, not just inside of Estonia, but also in Latvia and Lithuania as well, that are suitable landing sites.”

“The first is, trust the pilots right? So the larger Air Force in a whole needs to trust that the A-10 pilot group is capable of executing this in a very important mission set.”

“The next thing is the pilot trusting the airplane. As you operate this these sort of austere environments, the pilot has to have confidence that he or she can actually land in these environments, and execute the operation safely.”

“And the third, and I think equally as important, is we exercise the Special Tactics Squadrons, and other people that are involved in controlling us, and keep them proficient and current.”

Even in a training situation, landing on rough surfaces poses risks. “The airplanes can blow tires. The concrete isn't as well grooved. In this case, the concrete is not even nearly the same as it would in a normal airfield,” Dennis said. “So there's a lot of challenges that, physically, the airplane will face when … the rubber actually meets the concrete.”

“There's a lot of detailed planning that goes into ensuring that all of these areas have been properly looked at,” Dennis added. “The Special Tactics Squadrons have a very methodical way with which they come and analyze and basically evaluate these landing surfaces.”

The A-10, however, is the best plane for this kind of job. “The reason the A-10 does this is because it was designed to do this,” Dennis said. “In the design phase of the actual airplane, was the consideration for this type of environment. So landing gear all the way up to the high-bypass engines, that sit above the airplane, all of that is specifically designed so the airplane is not just survivable, but can operate in these austere environments.”