Getting Doc off the ground for the first time in 60 years wasn’t easy, but on Sunday morning the the... 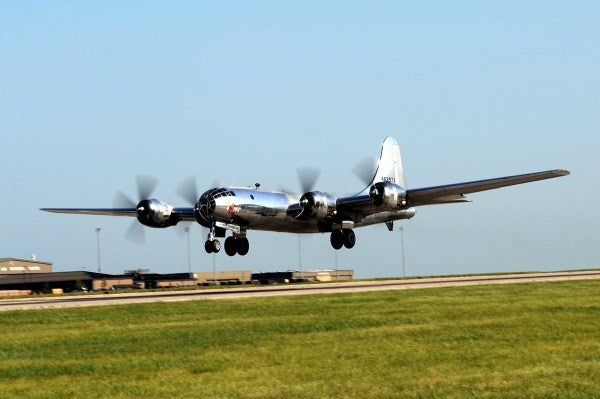 Getting Doc off the ground for the first time in 60 years wasn’t easy, but on Sunday morning the the Boeing B-29 Superfortress finally eased into the air for what turned out to be a brief first flight.

The Wichita-built, World War II bomber lifted off from a McConnell Air Force Base runway heading south at about 9 a.m. on Sunday and stayed airborne for about seven minutes before landing on the north end of the same runway.

Officials attributed the short flight to an engine information sensor that turned on and prompted the crew to cut short the milestone flight.

Still, Doc took off, flew in a sort of half-circle pattern beyond McConnell and landed safely, said Jim Murphy, restoration program manager for Doc’s Friends, the nonprofit group that owns the B-29.

The brief flight didn’t seem to disappoint an invitation-only crowd of several hundred people — most of them restoration volunteers as well as public officials, including Mayor Jeff Longwell and U.S. Rep. Mike Pompeo, R-Wichita — who were gathered in a grassy berm off to the side of an Air Capital Flight Line taxiway that sits on the opposite side of McConnell’s runways in southeast Wichita.

They let out roaring cheers when Doc first taxied by the group, then again when it lifted into the air, and finally when it returned to the Air Capital ramp after its flight.

“It flew like a good B-29,” said Charlie Tilghman, Doc’s pilot in command, immediately after the flight.

“The airplane is going to be great,” he said in a later interview. “The engines are strong and smooth. Just the darn warning light.”

Sunday’s flight capped off a more than 16-year restoration effort involving hundreds of area volunteers who collectively put in more than 350,000 hours restoring Doc. The cadre of volunteers included some people who worked on the original B-29 production line in Wichita or were B-29 crew members.

“They told me it would be seven years (to restore Doc), but it was 16 years,” said Connie Palacioz, who at 18 worked on the B-29 production line and riveted Doc’s nose section in 1943. “When it came from the desert it looked terrible. I never thought I could see it like this, you know. It was just pieces, but lucky that we could do it. We did it.”

Boeing’s Wichita plant churned out 1,644 of the airplanes during World War II. The B-29 is best known as the bomber type that dropped atomic bombs on the Japanese cities of Hiroshima and Nagasaki, ending World War II in the Pacific.

Doc, which served in a squadron named Snow White and the Seven Dwarfs from 1945 until 1956, came to Wichita in pieces of the back of semis in 2000 to what was then Boeing Wichita on South Oliver. The company made space available at the factory for the bomber’s restoration.

Tony Mazzolini, a former flight engineer who had been searching for a World War II-era airplane to restore, discovered Doc in 1987. He acquired the airplane from the Navy and brought it to Wichita for restoration. It had been sitting for 31 years at the China Lake Naval Air Warfare Center Weapons range in California’s Mojave desert as a bombing target.

A few years after Doc’s arrival in Wichita, the restoration effort was put on hiatus for a few years because of a lack of hangar space and a poor economy.

A group of area business leaders and aviation enthusiasts formed Doc’s Friends and acquired the B-29 from Mazzolini in 2013. The following year restoration was restarted.

“They said, ‘Don’t worry, Tony, we’ll make sure it flies before you reach the end of the runway,’” Mazzolini, who was aboard Doc on the flight, said Sunday. “And they did.”

“It was the volunteers, not me, that made this happen. Thank God.”

Dan Wimberly, who works in tooling at Spirit AeroSystems and is one of Doc’s longest volunteers, came to the flight dressed in a tuxedo. He said he knows of at least three volunteers who died while Doc was being restored. Wimberly was at the bedside of one of them who died four years into the restoration, and made a promise.

“With tears coming down both our eyes, holding our hands, I told him if I had an ounce of patriotism to my soul I would help him finish this airplane,” Wimberly said.

Doc began its taxi to the runway at around 8:20 a.m. About 10 minutes later, the airplane made its way back to the Air Capital ramp and shut down its engines. That’s because the bomb bay doors weren’t securely latched. Fifteen minutes later, Doc crews successfully secured the doors, restarted its engines and taxied a second time out to the runway.

Murphy and T. J. Norman, a longtime volunteer and flight crew member, said the sensor that prompted the short flight is likely not a major problem or setback to additional flights.

“We’re 99 percent sure it’s a very simple fix,” said Norman, who added that the flight crew saw the light go off three times on Saturday during high-speed taxi testing of Doc.

“What we found the last couple of times was just a tiny piece of fuzz” that caused the sensor to light up in the cockpit, Norman added.

Murphy said he expected Doc’s next flight to occur sometime shortly after the Experimental Aircraft Association’s AirVenture show in Oshkosh, Wis. That’s because the the flight crew that assisted them with Doc’s first flight will be busy at that airshow, which runs the last week of July, supporting Fifi.

Fifi, owned and operated by the Commemorative Air Force, was until Sunday the only flying B-29 in the world.

Fifi pilots, including Tilghman, who is a Federal Aviation Administration examiner for B-29 pilots, have been actively assisting with Doc’s first flight and its restoration.

Since last fall, the restoration effort and the airplane have reached a number of milestones, including a successful start of its four, new 3,600-horsepower engines, a Kickstarter campaign for first flight that netted $159,151 and Federal Aviation Administration airworthiness certification.