Army personnel recently traveled from Germany to the Aberdeen Proving Ground in Maryland for testing and training on new variants of the... 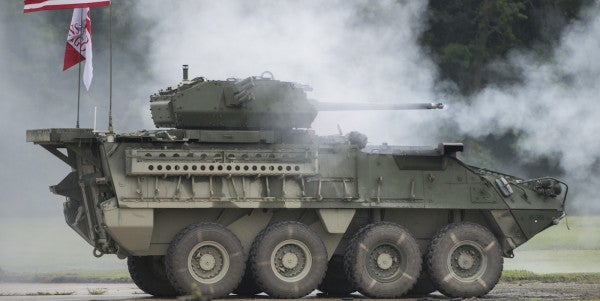 Army personnel recently traveled from Germany to the Aberdeen Proving Ground in Maryland for testing and training on new variants of the Stryker Infantry Carrier Vehicle.

The soldiers tested out Strykers armed with a 30 mm cannon as well as with a common remote-operated weapons station that allows soldiers inside the vehicle to fire Javelin antitank guided missiles.

Twelve of the Stryker variants — six with 30 mm cannons and six with Javelin missiles — will head to Germany in January for more evaluation by US troops before the Army hopes to deploy them to a forward position in Europe next summer.

“It's doing a lot more damage and you're getting better effects,” Staff Sgt. Randall Engler said.

Previous variants of the Stryker have been armed with either an M2 .50-caliber machine gun or a MK19 grenade launcher. The request for more firepower came in response to recent military operations by Russia.

“This capability coming to [2nd Cavalry] is directly attributable to Russian aggression and we are actively working with our foreign partners in how to help shape our formation,” said Lt. Col. Troy Meissel, the regiment's deputy commanding officer, according to the Army.

The new armaments don't make the Stryker a fighting vehicle, but Meissel said the search for heaftier weapons stems from the reduction in manpower in Europe from 300,000 during the Cold War to about 30,000 now.

Advancements in Russian armor have been cause for concern among military planners in the West. Moscow's new Armata tank will reportedly be outfitted with an active-protection system, which uses radar and projectiles to detect and counter antitank and anti-armor weapons.

The US Army is also looking at APS for the Stryker and its Abrams tank, though the latest variant of the RPG is rumored to have an APS countermeasure.

Relations between Russia and US allies in Eastern Europe have grown more contentious in recent months, particularly in the run up to Russia-Belarus military exercises in September that will reportedly see 60,000 to 100,000 Russian troops deployed to Belarus and western Russia.

Countries in the Baltics have warned of more ambitious Russian espionage efforts, and NATO aircraft have tangled with their Russian counterparts numerous times in over the last year.

The US has done several military exercises with partners in the region this year and increased deployments, including of Patriot missile air-defense systems, to NATO member-states in Eastern Europe.

Military.com has more footage of the new Stryker variants in action.