A video obtained by the San Diego Union-Tribune shows the Jan. 23 flyover of an F/A-18D at Marine Corps Air Station Miramar. That flight cost a squadron commander his job 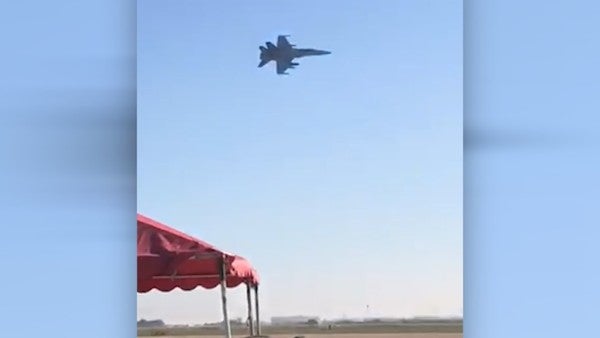 A video obtained by the San Diego Union-Tribune shows the Jan. 23 flyover of an F/A-18D at Marine Corps Air Station Miramar. That flight cost a squadron commander his job.

On Thursday, the Miramar-based 3rd Marine Air Wing announced that Lt. Col Ralph Featherstone, commanding officer of Marine All Weather Fighter Attack Squadron 225, was relieved the day after the flyover, due to concerns of “poor” judgment.

On Friday, an air wing official confirmed the removal was linked to the flight shown in the Union-Tribune video.

Featherstone was in the rear seat of the jet when it flew lower and faster than was approved in the day's flight plan. It was the final flight of the F/A-18Ds flown by the squadron and part of a “sundown” ceremony at the base, the Marines said in an earlier statement.

The squadron is transitioning to the new F-35C Lightning II aircraft.

Reached by phone Friday, Featherstone said that although the jet flew lower and faster than was planned, he did not receive complaints from the tower or the Federal Aviation Administration.

“We had landing traffic,” Featherstone said. “We had to de-conflict from that and felt sandwiched in a little bit.”

According to Featherstone, who was in the rear seat and not flying the aircraft, his attention was on the aircraft that was landing and not on where his pilot was flying.

“I can't tell you why the pilot descended.” he said. “Obviously I'm unhappy with the way this turned out, but, as commander I'm ultimately responsible. If deemed outside the box, I'm responsible.”

A scene from the Jan. 23 flyover (YouTube screenshot via San Diego Union-Tribune)

Not only was the flyover too low, Featherstone said, but in avoiding the landing traffic, the pilot also flew too close and too fast to where onlookers were watching.

Featherstone said he doesn't know where he will go next in the Marines but he thinks he's unlikely to be promoted after this and that his career is essentially over.

“The relief came as a surprise from an otherwise exceptionally performing commander with a long and distinguished career,” the Marines Corps' statement said Thursday. “It is a necessity to enforce standards and is vital that 3rd MAW provides strong and effective leadership to promote operational excellence, trust, and combat readiness.”

An interim officer-in-charge has been assigned to finalize the squadron's transition, the Marine Corps' statement says.