"We think there's probably more installations than that ... We found that we undercounted within some of the (National) Guard sites" 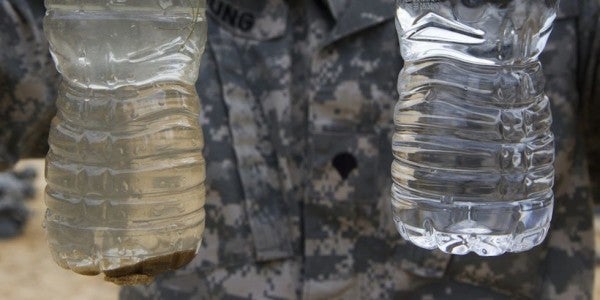 In 2018, the Pentagon reported that 401 sites — including wells, on-base drinking sources and groundwater — at its military bases and communities worldwide had tested positive for higher than allowable levels of Per- and polyfluoroalkyl compounds, commonly known as PFAS.

The compounds are concentrated in the Aqueous Film-Forming Foam (AFFF) that the military has sprayed on aircraft fires since the 1970s.

The compounds in the military firefighting foam have been linked to cancers and birth defects. Over decades of use at military bases, the foam has seeped into groundwater and drinking water sources.

Since the release of the original list of 401 sites in the 2018 report, communities near military bases across the U.S. have demanded that Department of Defense fix the water contamination. Some states, such as New Mexico, have also filed lawsuits to force a faster cleanup or compensation.

Based on further testing, that 401 number is likely to go higher, Robert McMahon, Assistant Secretary of Defense for Sustainment said Wednesday. A new, higher number is expected in an interim report on the issue that is expected to go to Defense Secretary Mark Esper next week.

“We think there's probably more installations than that,” McMahon said. “We found that we undercounted within some of the (National) Guard sites.”

“I think what you will see out of the report is a revised number above 401,” McMahon said.

The upcoming report was directed by Esper in July. It is expected to address the status of cleanup, which the Pentagon has previously reported will top $2 billion, and how best to move forward with getting health care for those affected by the contaminated water.

PFAS is just one of many types of potential “toxic exposures” linked to an increased number of cancers among veterans that military families are now pressing the Pentagon and VA to more directly address, and find ways to make it easier for affected service members or their families to get care for.

Esper is expected to receive a draft of the report before Thanksgiving, with a final report to be distributed to the public in late December or early January.

McMahon said the report will also likely conclude that so far, the military also still has not found a suitable substitute for AFFF to put out military aircraft fires.

While the military has put in place a substitute foam with lower concentrations of the PFAS compounds for training purposes, it is still using the original AFFF to put out actual aircraft fires, McMahon said.

In a meeting with reporters, McMahon lifted up a small jar of one of the substitute foams that had been developed. It was a viscous, amber-colored gel that did not pour quickly to the mouth of the jar when it was tipped upside-down.

That would be unacceptable in an actual fire, where the slow-moving gel would not be quick enough to put out a fire on a ship, for example, McMahon said.

So far, the Defense Department has spent about $22 million researching a new foam.

The use of the foam has left many veterans wondering whether the cancers they or family members have faced are linked to firefighting foam.