The Military Bought Thousands Of Boots Labeled ‘Made In The USA.’ They Were From China

Five executives with a former leading manufacturer of U.S. military boots have been sentenced in federal court for saying the... 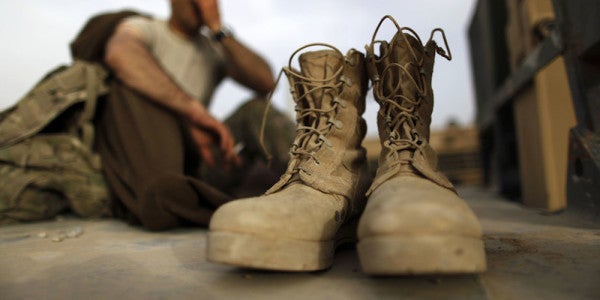 Five executives with a former leading manufacturer of U.S. military boots have been sentenced in federal court for saying the boots were made in Tennessee when they were actually produced in China.

According to an indictment filed in U.S. District Court, the actual Chinese manufacturer of the boots was told to include “USA” on the label of Wellco boot uppers that were then shipped to the U.S. The “Made in China” tags were removed, the indictment says. Soles were affixed to the boots at Wellco's plant in Morristown, Tennessee, and elsewhere, according to the document.

From 2006 through 2012, the U.S. Department of Defense paid at least $138 million to Wellco for military footwear, according to the indictment.

Two of the executives with manufacturer Wellco Enterprises were sentenced in U.S. District Court in Greeneville, Tenn., to six months in prison, the Kingsport (Tenn.) Times News reported. The others received probation.

A sixth executive, Vincent Ferguson, who was the company's president and CEO, will be sentenced later this year, according to the newspaper.

The indictment filed in September 2016 accused the six of marketing and selling at least $8 million of boots from December 2008 to August 2012 to the U.S. government, government contractors and the public “that were falsely represented as 'Made in the USA ….”

Wellco Enterprises was a leading manufacturer and supplier of military and other “rugged footwear for over 70 years, the indictment says. The company was founded in 1941 in Waynesville, N.C.

According to a U.S. Department of Justice news release in February, Vincent Ferguson, 66, of Knoxville, Tennessee, pleaded guilty on Feb. 15 to conspiracy to commit wire fraud.

Matthew Harrison Martland, former director of distribution and logistics, aiding and abetting the altering of county of origin marks, the Times News reported.