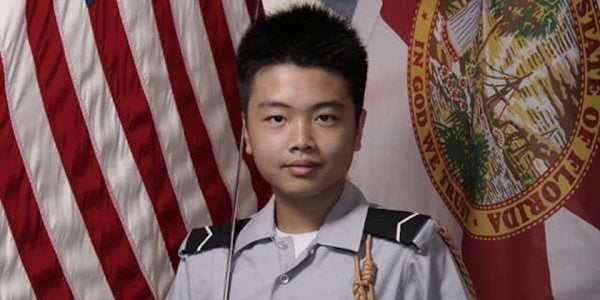 West Point will confer a letter of admission, along with honorarium tokens, to his family, local West Point alumni Chad Maxey said.

One of USMA's priorities is to develop leaders of character who are committed to the values of Duty, Honor & Country. Peter Wang's actions on February 14 are an example of those principles & the academy honors his dream of being a West Point cadet with a 2025 letter of acceptance pic.twitter.com/fycvJBhte8

Wang died in his JROTC uniform on Wednesday, holding the door open to allow others to escape, as gunman Nikolas Cruz shot and killed 17 at Marjory Stoneman Douglas High School in Parkland, authorities and witnesses said.

Wang’s funeral is scheduled for 1 p.m. Tuesday at Kraeer Funeral Home, 1655 N. University Drive in Coral Springs. He will be laid to rest at Bailey Memorial Gardens in North Lauderdale.

“He was a JROTC Cadet who was last seen, in uniform, holding doors open and thus allowing other students, teachers, and staff to flee to safety. Wang was killed in the process. His selfless and heroic actions have led to the survival of dozens in the area. Wang died a hero, and deserves to be treated as such, and deserves a full honors military burial.”

Related: The Army Is Officially Honoring Three Slain JROTC Cadets For Their Heroism During The Florida Shooting »

Maxey said a local veteran group read of Wang’s dream of attending the academy, and confirmed with a cousin that it was true. He said Capt. Shahin Uddin was flown to South Florida to provide the posthumous letter to the family.

“This story … has kindled so many hearts for action in a time when things have felt so hopeless,” Maxey said in a text message.

Wang has two younger brothers. His parents own a restaurant in Pompano Beach.