The Army soldier driving a military vehicle that flipped over in Orange County last year, killing a West Point cadet and injuring 21 other passengers, has been found guilty of negligent homicide and sentenced to three years' confinement by a military court panel in Georgia 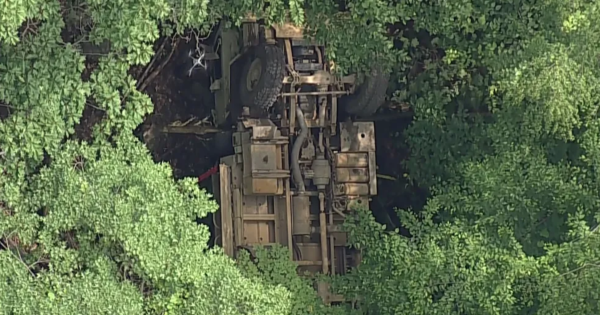 The Army soldier driving a military vehicle that flipped over in Orange County last year, killing a West Point cadet and injuring 21 other passengers, has been found guilty of negligent homicide and sentenced to three years' confinement by a military court panel in Georgia.

The panel of eight officers and soldiers sentenced Staff Sgt. Ladonies Strong on Monday after rendering a verdict on Saturday at Fort Stewart, home of the 3rd Infantry Division, according to a press release from the base.

Strong, 32, also was found guilty of prevention of authorized seizure of property, and acquitted on additional charges of involuntary manslaughter, reckless operation of a vehicle and dereliction of duty. The panel lowered her rank to private and ordered her to be discharged for bad conduct after her confinement, the Army base reported.

The accident, which took place during a training exercise in a hilly, wooded area on June 6, 2019, claimed the life of Christopher Morgan, a 22-year-old cadet and standout wrestler from West Orange, New Jersey, who was due to graduate this year. His classmates and President Trump paid tribute to Morgan at the U.S. Military Academy's commencement ceremony last month.

Nineteen other cadets and two soldiers were injured in the vehicle rollover.

“There are no winners in this case,” Morgan's mother, April Puckett Morgan, wrote on Tuesday on Facebook after the sentence was delivered.

She said she and her husband, Chris, “are not overjoyed that Staff Sergeant Strong is going to jail,” lamenting that “a few seconds of being a distracted driver driving up a steep rocky gravel road” and had taken her son's life, injured others and ended Strong's career.

“All we want more than anything in this world is to have CJ with us, to see him graduate from the United States Military Academy, Commission as a 2nd Lieutenant in the Army and helping him move to his first Army base,” Puckett Morgan wrote. “This gives us a smidgen of justice and relief. We now can MOVE FORWARD and complete CJs mission of service to others. Our hearts will forever be broken but we will carry CJ with us always.”

Her son majored in law and legal studies at West Point and wrestled for the academy team. He had been a star wrestler at West Orange High School, winning 40 matches his senior year and finishing fifth in a statewide tournament at 182 pounds that year.

The tactical vehicle in which Morgan was riding overturned near Camp Natural Bridge, a summer training site for West Point cadets that is off Route 293 in the Town of Cornwall, about nine miles south of the academy.

Morgan's younger brother, Colin, entered West Point as a cadet last summer with its class of 2023. Colin Morgan, who also wrestled at West Orange High School, got his appointment to the military academy a few months before his brother was killed.