We’ve Broken Ground On A Memorial For Gold Star Families

For all too many families every day is Memorial Day. On Monday dignitaries and others gathered outside Annapolis to break... 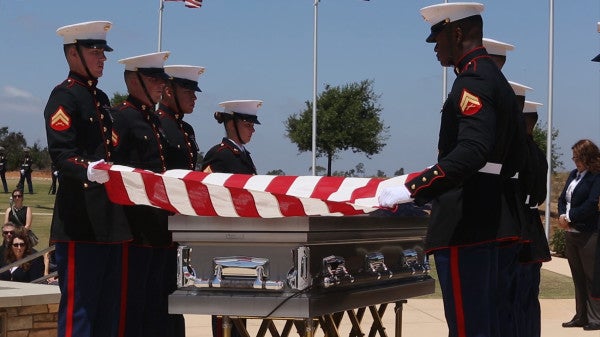 For all too many families every day is Memorial Day.

On Monday dignitaries and others gathered outside Annapolis to break ground for a memorial monument honoring Gold Star families who bear the burden of losing a loved one in war.

“We are here on their behalf to break ground on something no one wants, but that all of America needs,” Maryland Secretary of Veterans Affairs George Owings told those gathered at the monument site, just uphill from the World War II Memorial on Route 450 across the Severn River from the city.

When men and women choose to serve in the military their families can display a Blue Star service banner to denote their loved one's service.

RELATED: What happens when a blue star turns gold »

Not one of them wants to become a Gold Star family, denoting that a family member has died in war.

“Thousands of Marylanders have made the ultimate sacrifice and countless others bear visible and invisible wounds of war,” Lt. Gov. Boyd Rutherford said.

“With this monument we continue to vow never to forget the loved ones who are left behind and bear the wounds of their own,” Rutherford continued. “We remember their bravery and the tremendous debt we owe them.”

Several of the organizers pushing the event credited Owings and Gov. Larry Hogan for relatively quick action to get the monument rolling.

“We had our first meeting last December,” said Annapolis resident and Iraq war veteran Chase Savage. “I can't believe we are here already.”

Savage, who lost part of his right arm in an IED explosion in 2004, told the gathering that he was shocked to learn there was not a monument already honoring Gold Star families.

“My sacrifice is nothing compared to what Gold Star families have given our country,” he said.

“Maryland has a lot of monuments. There are monuments to watermen, athletes who could swing a baseball bat, and the great work of firefighters. How is it possible there is no monument to honor Gold Star families?”

He and others hooked up with the Hershel “Woody” Williams Medal of Honor Foundation, named for the World War II Medal of Honor winner. After meeting with Owings, they were off and running.

Gary Swanson, of Rose Haven, who ten years ago lost his son, Staff Sgt. Christopher Swanson, killed by a sniper in Iraq while serving his third tour, was moved by the effort. He has been active in the Gold Star community and pushed for Maryland to issue Gold Star license plates.

“I am so thankful for all those who came out to support this effort,” he said. “This memorial will allow all Gold Star families and residents of the state of Maryland to reflect on the great sacrifice our men and women make.

“Sometimes we get complacent. But with men like Chase, a wounded and decorated Iraq veteran, and others (working to do this), we are humbled they want to give back to us.”

The monument is being built under the auspices of the Williams foundation. Williams earned the Medal of Honor on Iwo Jima when he single handedly took out several enemy pillboxes with a flame thrower over four hours.

The foundation has built eight memorials, the first in Williams' native West Virginia. Four more are in the works, including the one in Annapolis.

“It is a privilege for me to be associated with the Gold Star families and an opportunity to do a service, or another service, for my country and communities across the country,” the spry 92-year-old said, with the distinctive blue ribbon bearing his medal around his neck.

He sees it as doing more work for the real heroes, those left behind on the battlefield, a notion impressed upon him the day after he and 10 other Marines were presented medals by President Harry Truman.

“We got orders to report to the office of the Commandant of the Marine Corps,” Williams said after the ceremony. The commandant was Gen. A.A. Vandergrift, himself a Medal of Honor winner for leading the Marine assaults on Guadalcanal.

“We had to talk to him individually,” Williams said. “He told me this, 'That medal does not belong to you. It belongs to all the Marines who did not get to come home. Never do anything to tarnish their honor.'”

Williams has tried to live up to that notion literally and figuratively. He is in the midst of the campaign to erect memorials across the country to honor the families of the fallen.

“We have a vision to have one in every state, in communities like this one. And it is rolling all over the country,” he said.

He takes special care of the medal, too.

“I keep this medal shined,” he said. “It will never tarnish.”

The four-panel granite memorial will sit in an area recently donated for the cause by the State Highway Administration, said Dennis Brant, spokesman for the foundation.

The 14,000-pound, $55,000 memorial is two-sided. One side has a gold star and reads “A tribute to mothers and fathers and relatives who have sacrificed a loved one for our freedom” across the four panels.

On the other side four images will be etched into the granite with images relating to Maryland.

Organizers say it could be completed in the next several weeks.