‘We’ve Got A Military That Is Completely Broken,’ Says Ranger-Turned-Congressman

As the owner of a small business, U.S. Rep. Steve Russell knows something about operational efficiency. The Choctaw Republican also... 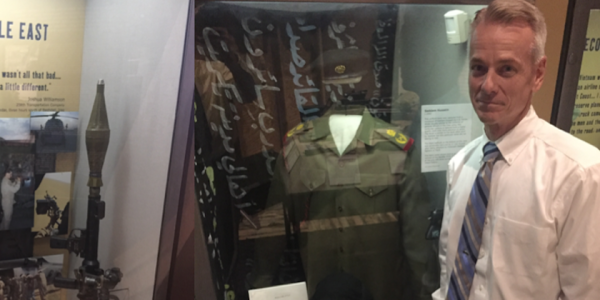 As the owner of a small business, U.S. Rep. Steve Russell knows something about operational efficiency.

The Choctaw Republican also knows the federal government has a lot of room to improve in this area.

One of his main goals in this year's congressional session is to fight waste in government.

A report he issued in December identified “$140 billion in cost overruns, poorly designed programs and money that was dumped down the drain.”

Russell was back in his district Monday. The House will be back in session on Friday.

“I'm going to focus on duplication in government, stupidity in government,” Russell said in an interview in his Del City office. “We've got to be able to beef up agencies with their auditors and inspectors so they can go out and find fraud.

“In our Waste Watch Report No. 6 we found billions of dollars went out to Americans who were not supposed to receive them. If you had a business, you'd be looking for the bleed out. You'd find the bad actors and put a stop to those things.”

“We're certainly not making huge sums of money, but we're making marvelous firearms for the shooting public,” he said. “We build the rifles that veterans could not bring home. It's caught on and that's why we've been in business going on seven years.”

Another goal for Russell is repairing the U.S. military.

Russell is an Army Ranger graduate who commanded infantry troops in Iraq. He retired as a lieutenant colonel.

He has been a foremost advocate for President-elect Donald Trump's pick for defense secretary, retired Marine Corps Gen. James Mattis.

He said the first step in turning things around is giving the defense secretary post to Mattis.

“Let's get him in there and get our military repaired,” Russell said.

Military cuts need to be restored and ISIS needs to be wiped out, he said.

“My goodness, the most humane thing we can do with regard to ISIS is to win. Let's eliminate them.”

A focus for the new congressional session will be repealing and replacing the Affordable Care Act, also known as Obamacare.

Russell said there is a broad consensus in favor of maintaining a popular provision that prohibits insurance companies from denying coverage because of a person's pre-existing medical condition.

Popular provisions like this and another one that allows young adults to stay on their parents' medical insurance until age 26, support unpopular ones like the requirement that people buy medical coverage.

“Where there is a will, there is a way to get to it,” Russell said. “And when there is a bipartisan will, you usually are going to get something that will stick.”

More problematic from Russell's viewpoint is the provision allowing people to stay on their parents' policies until age 26. This may make sense for some young people, but not for others who can get their own coverage.

“A lot of that needs to be revisited,” he said.

“I can tell you what I was doing at 26, and it wasn't staying on my parents health care plan. I was married. I was working. I was able to have insurance.”

He was a paratrooper serving in Alaska.