"Man it's really hard to describe. But when you land and you're back on the ground you just feel kind of complete." 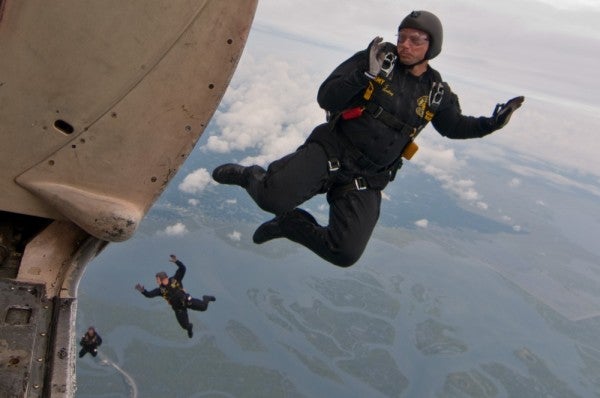 Houston Creech's favorite day at work is one adrenaline junkies everywhere should aspire to try.

He parachutes out of low-flying airplanes and must then land safely in the middle of what could best be described as a community fair, complete with carnival rides, parlor games and food stands on all sides of his landing zone.

A little too far in one direction and Creech could land in a lake. Too far the other way and he could find himself reaching land on a busy highway.

For Creech and his co-workers, members of the Army Golden Knights parachute team, jumping out of an airplane is just another day at work, but not at the office.

“The best part of it to me was it was pretty intimidating. We had worked so hard in the winter training on what we do — we jump our faces off out there so we can take our show on the road and not be a hazard by landing where we shouldn't. Jumping into this was a test of our hard work for us new guys.”

Originally from Cleveland County, Creech joined the Army in 2006. Military life, he said, offered the best chance at a life of adventure and travel his teenage brain could imagine.

“I had a couple of options when I joined, heavy machine operator and truck driver,” he said.

But while watching a video explaining what it took to be a parachute rigger, he knew what job was for him.

Creech's journey from Army private to one of its most elite airplane jumpers spans more than a decade, and is a little different from the average story of a Golden Knight.

Before one can try out for the unit, they have to make at least 100 freefall jumps — jumps where you are responsible for your own parachute and bringing yourself to the ground safely.

Most Golden Knights, Creech said, get their jumps in the civilian world by paying private companies to train them and let them jump on their free time.

Creech got his jumps in with the Army, attending and later working at the Army Freefall School. While at the school he debated trying out for the Knights, but felt his age would prevent him from making it. His boss, a former Golden Knight, told him to try out anyway.

In 2018 Creech was one of 16 soldiers to be accepted into the Golden Knight's selection course. For six weeks his daily routine consisted of difficult exercises followed by jumping out of airplanes 10 or more times, then going back to the barracks to do peer evaluations.

At the end of each week instructors would take feedback from those evaluations and send someone home. By graduation day, only six soldiers were left. Today, only four are Golden Knights.

The struggle was worth it, however. Creech was accepted into the Golden Knights as a parachute rigger. His job is now to travel the country some 200-plus days each year, pack and service parachutes wherever he can, even if that means opening one up in his hotel room — and then go jump out of a perfectly good airplane.

Today, even after some 14 years of plummeting to Earth, Creech said he still loves the rush associated with his job.

“Man it's really hard to describe. But when you land and you're back on the ground you just feel kind of complete I guess,” he said. “I think the part people don't think about, but that's still really cool is when we are on the ground we get to talk about the Army and the opportunities it can give people. You don't have to do it forever, most guys come in for a few years, get some job experience and go back out and go to work.”

Creech will spend at least another year or two with the Golden Knights demonstration team, then likely rotate out to a more traditional duty station. Before he leaves he wants to try out for one of the Golden Knights competition teams, which compete for medals in choreographed jumps of up to eight people.