Retired Army Colonel: What Exactly Are US Troops Dying For In Afghanistan?

How much more blood must be spilled in Afghanistan before Washington acknowledges reality and ends the war? Three more American troops... 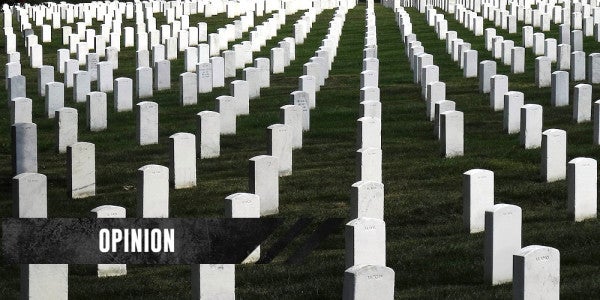 How much more blood must be spilled in Afghanistan before Washington acknowledges reality and ends the war?

Three more American troops were killed in Afghanistan by a roadside bomb on Tuesday and three others wounded; their names are being withheld pending notification of next of kin. These deaths, along with Sgt. Leandro Jasso who was killed in a firefight last Saturday, bring the number of troops killed in Afghanistan this year to thirteen. Unless major changes are made in U.S. strategic policy, they will not be the last to die.

During my second combat deployment to Afghanistan in 2010-2011, I traveled around the country extensively in the conduct of my duties. The base where I stayed endured more than a dozen rocket attacks. I once narrowly missed being hit with a mortar bomb, I was in a convoy that got hit with an IED, was on a forward combat outpost that was subjected to a Taliban machine gun attack, and narrowly avoided stepping on an IED during a foot patrol.

I was lucky. Neither I nor any of my fellow troopers, were killed or wounded because of those attacks. As a result of those multiple near misses, however, I realized there was no guarantee that I would make it out of Afghanistan alive. The consequences to my family, I realized, would have been profound had the next attack successfully taken me out.

Towards the end of my deployment, I embarked on what was going to be my most dangerous mission that year. Because I knew if things went bad I would never be able to talk to my sons again, I made a tearful video to be given to them in the event that I didn’t make it home. As it turned out, the mission was completed without incident and they never saw the video.

As I enjoyed a lovely Thanksgiving with them this past weekend—now seven years after the recording and three years after I retired—I wondered what this day would have been like for them had God not spared my life back then. How would they have dealt in the immediate aftermath with the searing pain of being told their dad was killed in combat? How would they navigate all of the Thanksgivings, Christmases, birthdays, track meets, school plays and soccer games that I wouldn’t have been there to see?

My sons would have suffered grievously at the time, and the wounds would have been reopened every time they attended a special event and saw other kids’ dads there, or during holidays when I wouldn’t have been there.

“How much more blood must be spilled in Afghanistan before Washington acknowledges reality and ends the war?”

For me, William and Nicholas, it was only a mental exercise. But for thousands of other sons, daughters, mothers, dads, widows and widowers, there’s nothing theoretical about it: many suffered in silence this past weekend, as they have countless times since their loved ones were killed in Afghanistan (or Iraq, Syria, Africa or other locations where combat operations are permanently conducted)—as the surviving family members of Sgt. Jasso and the three other casualties are now learning to their eternal sorrow.

The question every American—and especially our leaders in Washington—must answer is this: what benefit has been accrued to our country as a result of these compounding sorrows, grief, and pain borne by such a tiny minority of our fellow citizens? I know what story is typically told in public venues, but I am also keenly aware of the metal-on-metal ground truth.

It’s almost a rote telling now: a U.S. service member is killed in action, his or her loss is mourned, they are lauded for their “service to the nation” and hailed as a hero for which all Americans should be proud. The truth—especially in regards to Afghanistan—is that their lives are lost for no gain to our country’s national security; there’s nothing heroic about sacrificing our troops’ lives in pursuit of a mission that can’t be accomplished.

I first told the American public about the mismatch between public statements of progress by senior officials and the observed reality on the ground there. I posed this rhetorical question: “How many more men must die in support of a mission that is not succeeding and behind an array of more than seven years of optimistic statements by U.S. senior leaders in Afghanistan?” As it turned out, literally hundreds more were killed and thousands more have been wounded since, and yet the obvious evidence of perpetual strategic failure continues without pause.

These were the facts in 2009 when I first argued against President Barack Obama’s troop surge, in 2012 when I published a detailed analysis of why we weren’t winning, and as still exists today: the war in Afghanistan cannot be won with military force, having troops on the ground there does not prevent terror attacks against our homeland, and no matter how many soldiers we deploy there or how many years they stay, the security of our country will not be improved.

What makes the most sense for America right now is to immediately end the war, redeploy our troops out of harm’s way, and continue to safeguard our country by means that actually do keep us safe (such as global intelligence, surveillance and reconnaissance assets, including close cooperation between federal and state law enforcement officials).

If we continue to ignore this patently obvious reality and fail to end the war, we’ll continue to sacrifice our most precious blood for no gain to our country, and Sgt. Jasso and the three who died yesterday will soon be forgotten as just the next faceless name to appear on a DoD press release.

Our service members deserve far better than that and our country deserves to be genuinely secured. Clinging to the myth and remaining in Afghanistan forever will prevent both.