For most of us, jumping out of a perfectly good airplane may seem like a ridiculous proposition, but for the soldiers assigned to the U.S. Army’s 82nd Airborne, it’s the only way to travel. 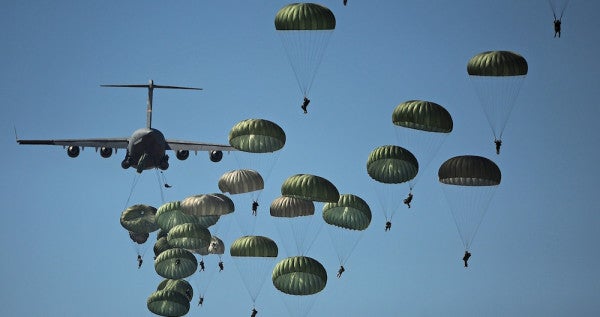 For most of us, jumping out of a perfectly good airplane may seem like a ridiculous proposition, but for the soldiers assigned to the U.S. Army’s 82nd Airborne, it’s the only way to travel.

The 82nd Airborne specializes in parachute assault operations in denied areas — what does that really mean? That 82nd Paratroopers are always on call and able to respond to crisis events anywhere on the planet within 18 hours (per the Defense Department’s requirement). During the recent protests in Baghdad, Iraq that saw the U.S. Embassy under attack, the 82nd Airborne were among the first to respond.

Serving in the 82nd Airborne means not only being ready to deploy with little notice, but it also means training hard while at home. On any given month, there are more than 10,000 training jumps conducted at the 82nd’s home in Fort Bragg.

These troops aren’t only about the fight, however. Troops from the 82nd were also deployed to New Orleans in the wake of Hurricane Katrina in 2005, with the first wave of soldiers arriving just seven hours after their orders to the area were issued. As rescue efforts throughout the city continued, soldiers from the 82nd performed search and rescue operations, expedited evacuations, and helped to maintain order within the city.

Of course, not everybody’s cut out for jumping of airplanes with all your gear strapped to your body, but even if you aren’t, you can still come along for the ride thanks to this video released by the Department of Defense and uploaded to YouTube by the page Gung Ho Vids.

This incredible footage shows what it’s like to soar through the sky alongside the Paratroopers of the 82nd Airborne, and you even get a chance to watch a passing C-17 Globemaster as it flies just above the open parachutes to allow another group of soldiers to make their jumps.