New Mexico veterans who served in Afghanistan are taking stock of what was gained and lost by the nation — and by the men and women who fought a war that often seemed forgotten. 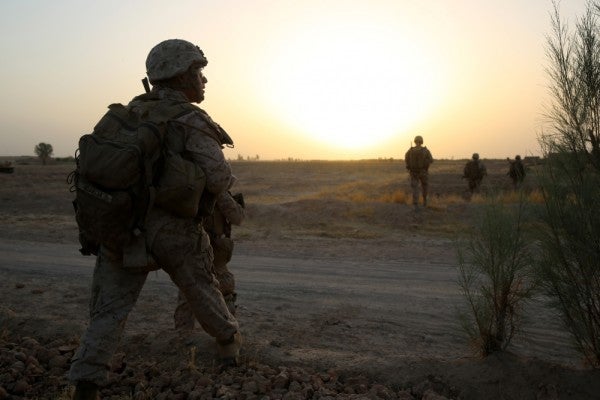 ALBUQUERQUE — As he recalled his time in Afghanistan as a U.S. Marine, Stephen Canty's hazel eyes darted around his apartment as if searching for something.

They might have been looking for a sense of peace.

A veteran of two tours in the America's longest war, Canty said he left more than blood, sweat and tears on Afghanistan's stark, forbidding landscape.

“Kind of my childhood I left there,” he said.

As the nearly two-decade conflict appears to be winding down, Canty and other New Mexico veterans who served in Afghanistan are beginning to take stock of what was gained and lost by the nation — and by the men and women who fought a war that often seemed forgotten back home.

Their conclusions, like the war itself, are full of difficult reconciliations.

Even as elements of the Taliban continue attacks on Afghan police and military units, and the Afghan government refuses to take part in a hostage exchange as part of a recent U.S.-Taliban peace deal, the twists and turns frustrate former soldiers like Canty, who served in Garsmir and later Marjah.

“I feel like we’re making peace with some of the biggest human rights violators in the world,” saud Canty, 30, who's now a University of New Mexico student. “This is not the best we can do. This is not what I signed up for.

“What I went over there for was to not leave a corrupt government in place and eventually let the Taliban retake the country.”

“We hear about a peace treaty and can't help but think it's a loss,” said Byrne, who served in Afghanistan in 2011-12. “When we talk about peace, my thinking is, it's two decades too late.”

But onetime Marine Joseph Jones, also a Las Cruces resident who served in Afghanistan, sees the possibility of peace in a different light. To Jones, who saw combat in 2008-09, it's about saving American lives.

“By not going over there, they’re not going to die,” he said. “I can’t call it a win, but I think it’s good. I don’t see the point in people being sacrificed by our government when we know that what we are trying to accomplish is not going to happen.”

The fragile peace agreement, agreed upon in late February, reduces the number of U.S. troops in Afghanistan from some 12,000 to 8,600 in 135 days and eventually removes all of them if the Afghan government and Taliban come to terms on a shared governance to maintain the peace. But days after the announcement, reports of Taliban attacks prompted a U.S. airstrike.

A full generation of New Mexico soldiers have served in Afghanistan, where conflict began in 2001 after President George W. Bush ordered a U.S.-led invasion in response to the 9/11 terrorist attacks.

About 2,400 U.S. troops have died in the war, with more than 20,000 wounded. The cost to New Mexico has been high as well. According to the state Department of Veterans Services, 28 New Mexicans and New Mexico-based servicemen and women have died in Afghanistan, 25 in combat.

“It's a weird situation,” Byrne observed. “It's America's longest war and what has it accomplished? Nothing.”

Canty's frustration also is palpable. “We didn’t leave a functioning democracy in place. We didn’t leave a safe environment for kids to go to school in and for the people of Afghanistan to heal from decades of warfare,” he said.

Jones sees it all in simpler terms. “I was going over there to do my job — kill the enemy, do what I had to do to survive and bring everyone back who went over there to do the mission,” he said.

The peace deal, if it holds, will someday lead to a civil war between Taliban forces and Afghan soldiers trained and supported by the United States, Canty predicted. Based on his experience, the Taliban will win, he said.

Byrne, who hails from South Carolina; Jones, who was born in Florida; and Canty, from Virginia, were teenagers eager to fight for freedom and American values when they joined the Marines.

Byrne said he was an unfocused and unproductive teen who wanted “the biggest boot I could find to put upside my own backside to do something productive, and the Marine Corps provided that boot.”

The Marine Corps, he said, “created a plan to kill the enemy. I got paid to do it.”

Canty recalled being 17 and ready to go to battle in Iraq. Instead, he was sent to Afghanistan.

Among his most vivid memories was his attempt to save a young Afghan boy who'd been shot during a Taliban raid on a U.S. checkpoint.

“I was running down the street with him, and his dad saw me and saw his son, who had been shot in the head,” Canty recalled, his eyes still darting around the room. “I kept trying to put him on the [military] helicopter, but his dad refused because he knew his son was already dead. I guess that idealistic part of me wouldn’t accept that.”

The father later returned to scream at Canty, who didn't understand the language but comprehended the anger; the sense that the boy might not have died if American troops had not been there.

What was it all for?

Canty wonders if his sense of idealism is now at war with the reality of what he experienced in Afghanistan.

Jones does not seem to wrestle as much with such thoughts. Married with one child and another on the way, he finds that talking through his pain helps. So does writing poetry. He says he looks at his combat experience as a book he can take off the shelf and leaf through at will, reviewing each page and paragraph and chapter.

Though he recalled times when his squad made a difference for individual Afghans and their families — like building a well for one community — he questions whether he made any real positive impact, particularly when judged against the civilian lives lost.

Byrne said that during his time in Marja, it didn't matter if U.S. military forces were capable of sweeping a region of Taliban fighters in any specific area because once the Americans left, “It would go back to exactly how it was.”

He suspects that will happen again in the entire country if America pulls its military forces now, he said.

“That place is like a giant rubber band,” he said. “The second we step out of there it’s gonna snap right back to how it was before we came.”

Canty — who produced a documentary on his experiences in Afghanistan called Once a Marine — is struggling not to snap back to who he was some 10 years ago when his final tour ended.

Struggling with the mental and emotional effects of war, he said antidepressant pills don't seem to be working. But Canty is willing to keep trying them.

His faith — so strong in the days when he attended church on a weekly basis before he went to Afghanistan — is something he now questions.

“A lot of people I know lost their faith after they went to Afghanistan,” he said. “They ask, ‘If there was a God, why would he do that?’ ”

Sometimes cynical, sometimes bitter, sometimes speaking in words laced with dark humor, Canty still optimistically wonders if “God told me to go to Afghanistan to teach me to remain positive after seeing the worst that humanity is capable of.”

But the peace treaty, if it plays out, does not sit well with him. If nothing else, he said, he hopes political leaders find “a better way” to victory the next time the U.S. enters a war.

“Obviously I hope we choose our next fight carefully,” he said. “And make sure that it’s worth fighting for.”