What We Know About The Marines Killed In Chattanooga

Four U.S. Marines are dead following a shooting Thursday at a military support facility in Chattanooga, Tennessee, in what some... 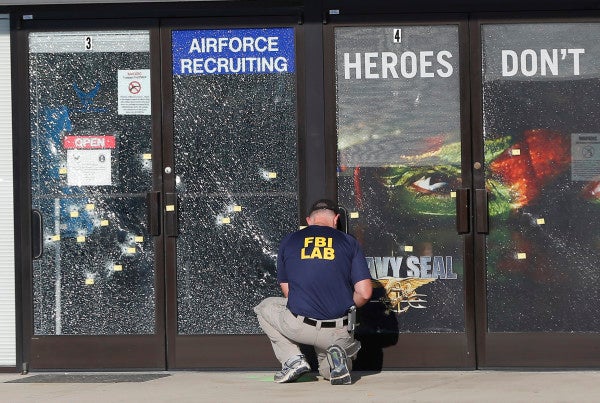 Four U.S. Marines are dead following a shooting Thursday at a military support facility in Chattanooga, Tennessee, in what some authorities are calling an act of domestic terrorism.

These four men came from different corners of the country and were at different stages in their military careers, but were united in their service, and now their sacrifice.

Per Department of Defense policy, the names of the victims are not yet released, however as information begins to trickle in it is important to recognize the lives of service these brave men lived.

Here’s what we know about them.

Sgt. Carson Holmquist and his wife Jasmine.Photo via Facebook.

Originally from Grantsburg, Wisconsin, Holmquist and his family lived in Jacksonville, North Carolina, where he was stationed at Camp Lejeune.

Pictures are visible on his Facebook of his wife Jasmine and their 2-year-old son Wyatt welcoming him back from a 244-day-long deployment with red, white, and blue signs that say “Welcome Home Daddy!”

A friend Tyler Larsen posted on his Facebook page, “Rip Carson Holmquist I was looking forward to grabbing drinks when you got out here but because some terrorist decided he didn't like the US military I will have a drink in honor of you. You will be missed bud. ‪#‎semperfi‬.”

He graduated Springfield’s Cathedral High School in 1994, and went on to enlist and deploy to Iraq.

“There’s no Marine you would want that was better in combat than him,” friend and Chicago native Josh Parnell told the Oak Lawn Patch. Parnell said Sullivan had been in the Marine Corps since 1997, had survived the Battle of Abu Ghraib in 2005, the most significant attack on U.S. armed forces since the war in Vietnam, and was thought to be approaching retirement in the next few years.

Sullivan had been wounded in Iraq and was a recipient of the Purple Heart medal and Combat Action ribbon.

He is survived by his parents, Betty and Jerry Sullivan, and his siblings Joe and Dianne.

Nathan’s Bar and Grill, of which Joe Sullivan co-owns, posted a message on their Facebook page this morning:

“Rest In Peace Gunnery SGT. Thomas Sullivan. Anyone who went to Holy Cross School, Cathedral High School or grew up in the East Forest Park knew who Tommy was. He was our hero and he will never be forgotten. Please keep his family & friends in your thoughts & prayers. Thank you Tommy for protecting us.

May the road rise to meet you.

May the wind be always at your back.

May the sun shine warm upon your face.

And rains fall soft upon your fields.

And until we meet again,

May God hold you in

the hollow of His hand.”

The restaurant also hung a flag today in memory of its fallen hero.

Wells was a 2012 graduate Sprayberry High School in Marietta, Georgia, and moved on to attend Georgia Southern University where was studied history, according to his Facebook Page.

Neighbor James Reid said Wells was a well-known member of the community. “It was just a few weeks ago I saw him driving in and out of the neighborhood,” Reid told CBS. “Skip was definite someone we knew and someone we thought whose future was going to be bright.”

Tony Wolcott who also went to Sprayberry High spoke to Atlantic Journal Constitution about being on the marching band with Wells.

“He was a really good leader … He was someone you could always depend on,” said Wolcott. “Whenever something needed to be done, he would take charge and do it, but not in an overpowering way.”

Wolcott said he had not seen Wells since last fall when Wells visited to Kennesaw State University, where Wolcott studies music education.

35-year-old David Wyatt was the third victim of Thursday’s shooting. Born in Russellville, Arkansas, Wyatt lived in Chattanooga with his wife of 11 years, Lorri, and their two children.

One of Wyatt’s neighbors told The Tennessean, “There were seven or eight cars there last night. I thought they were having a party. It didn’t go through my mind.”

Friends and relatives took to Facebook to express their condolences to the family.

Wyatt studied at the University of Montana for a time, according to his Facebook, but it is unclear if he completed his degree.