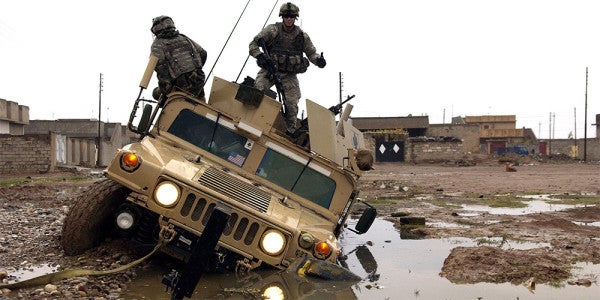 Tom note: Here is the second entry in our 10 Long March posts for 2018, the 9th most-read item of the year, which originally ran on May 10, 2018. These posts are selected based on what's called 'total engaged minutes' (the total number of time spent reading and commenting on an article) rather than page views, which the T&P; editors see as a better reflection of Long March reader interest and community. Thanks to all of you for reading, and for commenting–which is an important part of this column.

It appears as though we have decided that insurgents are no longer a threat and we would rather fight a near-peer enemy. In the new Army field manual, FM 3-0 Operations, the U.S. Army has apparently decided to forget past lessons learned. FM 3-0 signals a shift in military strategy and a focus back to large-scale ground combat operations against near-peer threats, where belligerents possess technology and capabilities similar to the U.S. military. Essentially, we no longer want to do the “Vietnam or Iraq thing” again.

If you were to compare the two Army field manuals, you would find that they are nearly identical. There are similarities in how we determine and define the following: Combat Power, Phasing, Offensive Operations, Multi-Domain Extended Battlefield (Multi-capable Forces), Conflict Continuum and the Range of Military Operations (Spectrum of War).

Another glaring similarity is how we define “winning” in FM 3-0 – and yes, we do actually define how to win in the Army field manual.

Winning is the achievement of the purpose of an operation and the fulfillment of its objectives. The Army wins when it successfully performs its roles as part of the joint force during operations. It wins when it effectively shapes an OE for combatant commanders, and when it responds rapidly with enough combat power to prevent war thorough deterrence during crisis. When required to fight, the Army’s ability to prevail in ground combat at any scale becomes a decisive factor in breaking the enemy’s will to continue fighting. The Army wins when an enemy is defeated to such a degree that it can no longer effectively resist, and it agrees to cease hostilities on U.S. terms. To ensure that the military results of combat are not temporary, the Army follows through with its unique scope and scale of capabilities to consolidate gains and win enduring outcomes favorable to U.S. interests.

One of the biggest flaws in Westmoreland’s strategy in Vietnam was that he sought to win battles through a war of attrition. He determined success by using the number of enemy kills (i.e. the “body count”). He defined winning as fulfillment of objectives, yet the objectives were never clear in Vietnam. Westmoreland sought victory through the defeat of the enemy to such a degree that the opponent could no longer resist.

So, what’s wrong with FM 3-0? It should be quite obvious. We are essentially using the same failing strategy Westmoreland used in 1968 in Vietnam. What’s wrong with this? Well, we lost Vietnam. For those who argue that we never lost on the battlefield, I will leave you with the following conversation in Hanoi in April 1975, as related by Harry G. Summers Jr. in On Strategy:

“You know you never defeated us on the battlefield,” said the American colonel. The North Vietnamese colonel pondered this remark a moment. “That may be so, but it is also irrelevant.”

Maj. Jamie Schwandt, USAR, is a student at the U.S. Army Command and General Staff College. He is a logistics officer and has served as an operations officer, planner and commander. He is certified as a Department of the Army Lean Six Sigma Master Black Belt, certified Red Team Member, and holds a doctorate from Kansas State University.