The Air Force is still looking for a permanent home for U.S. Space Command and the 1,400 personnel who will work there. 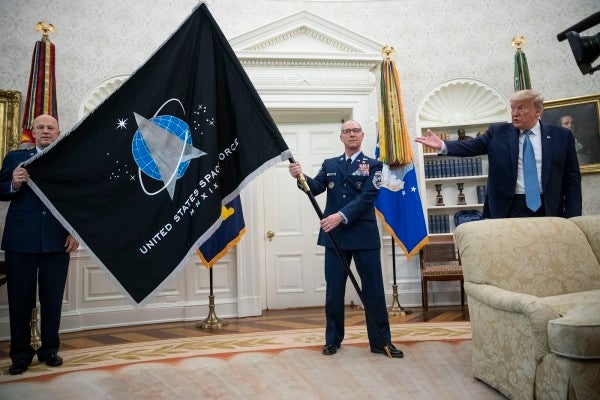 The Air Force announced Friday that it was revising the approach it's using to select the permanent headquarters for Space Command and the roughly 1,400 military and civilian personnel who will work there.

The new criteria “will increase the number of locations eligible for consideration,” the service said. Space Command, which will lead military space operations, was set up in August 2019 to support U.S. Space Force, which was established in December and will provide forces and assets to Space Command.

The new approach considers the “emerging organizational structure” of Space Force and “analyzes its effects on the limited number of highly specialized personnel and infrastructure required to support” both Space Force and Space Command, the Air Force said.

The approach also “expands the number of locations eligible for consideration” and “provides a comprehensive and transparent analysis before selecting a final location.”

Nominations, with an endorsement from that state's governor, are due by June 30.

Then the Air Force will carry out “a comprehensive evaluation in collaboration with eligible communities” and assign a score to the nominations based on evaluation criteria listed in the letter.

The Air Force plans to select a location in early 2021, though it will take about six years for facilities to be prepared. Until then, the provisional headquarters will remain in Colorado Springs.

Below, you can see what it will take for your city to host U.S. Space Command's permanent headquarters.

Screening Criteria — the minimum eligibility requirements in order to nominate and be considered for further evaluation.

Proximity to a military base — It must be within 25 miles or less of a military base so service members and their families can access services like military housing, healthcare, and child care.

Livability index — It must have a livability index score of at least 50 points out of 100 as determined by the AARP's Public Policy Institute. This will ensure the location offers a quality of life — which includes affordable housing, safe and convenient transportation, clean air and water, and inclusive opportunities — that allows U.S. Space Command to attract skilled workers.

Mission related (40 points) — This will assess the “available qualified workforce,” the site's “proximity to mutually supporting space entities,” and the location's ability “to provide emergency and incident response requirements, and enable mobility.”

Infrastructure capacity (30 points) — Infrastructure requirements include space for buildings and parking, communications bandwidth, energy resilience, and adequate security. It will also look for “the nearest active duty installation's base operating support to service members to include medical care, childcare, military housing, and transportation.”

Community support (15 points) — Support to military families will be measured by the quality of schools, cost of living, rules for professional licensing, as well as access to military and veteran support programs.

Costs to the Department of the Air Force (15 points) — This category will assess one-time infrastructure and transportation costs, construction costs in the area, the basic housing allowance rate, and area locality pay.

The revision to the process comes after political backlash to the previous approach.

In May 2019, the service said it was considering six locations for the headquarters: Buckley, Peterson, and Schriever Air Force Bases and Cheyenne Mountain Air Force Station in Colorado; Redstone Arsenal in Alabama; and Vandenberg Air Force Base in California.

In early March, shortly after Space Force's vice commander told lawmakers that the Air Force had been told to reopen the review process, Sen. Doug Jones, a Democrat from Alabama, pressed Defense Secretary Mark Esper on the reasoning behind the decision at a Senate Armed Services Committee hearing.

Jones said the approaching election made the reopening seem politically motivated, but Esper said it was his decision.

“During my talks on the Hill … I heard from members on both sides of the aisle that they felt that the process that had been run was unfair and not transparent, and there were a number of complaints,” Esper said. “So I directed at that time that we pause in place. I took a briefing on it … and we did not feel as well that it was transparent enough, that enough states, members, etc., had a chance to participate. So we directed it be revisited and a different approach be taken.”

That new approach would be transparent and consultative, with updates throughout, Esper said, “so everybody had confidence that it was fair and that there were no politics involved in it, and that it was the best site for the mission.”