To hear President Donald Trump hear it, Rear Adm. Ronny Jackson is a fine naval officer and physician with no... 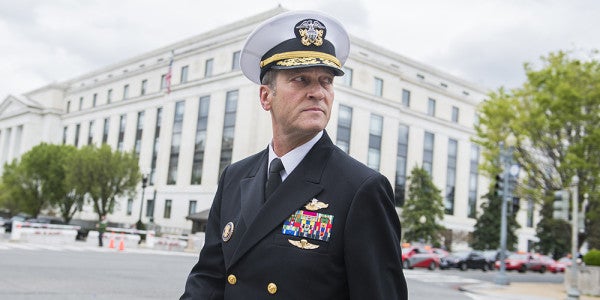 To hear President Donald Trump hear it, Rear Adm. Ronny Jackson is a fine naval officer and physician with no blemishes on his record, and his candidacy to run the Department of Veterans Affairs was scuttled by “vicious rumors” from scheming liberal politicians.

Secret Service has just informed me that Senator Jon Tester’s statements on Admiral Jackson are not true. There were no such findings. A horrible thing that we in D.C. must live with, just like phony Russian Collusion. Tester should lose race in Montana. Very dishonest and sick!

There are a lot of problems with Trump’s narrative, but another issue was revealed Monday, and it may be the biggest of all: One of the key accusations against Jackson — that he publicly disclosed personal medical information of a high-profile patient without her knowledge, in violation of federal law — comes not from a liberal senator or an outside interest group, but the wife of Vice President Mike Pence.

And the White House knew about it months before Jackson was put forward to run VA.

According to internal documents obtained by CNN and brought to light yesterday, Jackson “may have violated federal privacy protections” for Second Lady of the United States Karen Pence “and intimidated the vice president's doctor during angry confrontations over the episode.”

At issue was a medical emergency last September that required Pence to be transported from Camp David to Walter Reed Army Medical Center. Jackson reportedly took control of the second lady’s health care without notifying her doctor, then proceeded to brief White House staff on her condition without her consent.

The second lady and her physician were understandably unhappy, and Jackson called the doctor in for an after-action… which reportedly turned into a dressing-down. Pence’s doctor wrote it up thus:

“This meeting summoned by Dr. Jackson appears to have been in retribution for me verbalizing concerns over the protection of the SLOTUS' medical information and his inappropriate involvement in the decision-making process of her care, which is consistent with previous behavior that I have received from him in the past,” the memo says, referring to the second lady of the United States. “This unprofessionalism fosters a negative command climate that removes any opportunity for open, professional discussion.”

Subsequently “Karen Pence asked her physician to direct the vice president's top aide, Nick Ayers, to inform White House chief of staff John Kelly about the matter,” according to CNN. “Subsequent memos from Pence's doctor suggested Kelly was aware of the episode.”

Why does any of this matter, now that Jackson — who’s served as physician to three presidents — has not only withdrawn from the VA nomination but agreed to leave his post as White House doctor?

Because, whatever the merits of the accusations against Jackson, the White House knew he had problems, not just of the kind highlighted by critical senators, but with the Republican vice president’s family — and it chose to conceal that fact from the American public in trumpeting Jackson for the VA job.

All to replace a widely respected and deeply qualified VA secretary, David Shulkin, with someone who would supposedly be beyond corruption or reproach.

Last week, just a day before the piling accusations against Jackson sunk his nomination, White House Press Secretary Sarah Sanders went to bat for him in no uncertain terms. “Dr. Jackson’s record as a White House physician has been impeccable,” she said, claiming that “he has received more vetting than most nominees.” In the Trump administration’s investigations, she said, “Jackson received unanimous praise from dozens of witnesses and the investigations revealed no areas of concern.”

Pressed by a Fox News reporter, Sanders doubled down. “A very thorough investigation and vetting process has taken place,” she said. “None of those had come up.”

We now know that’s not true. Karen Pence’s doctor noted in the memos, obtained by CNN, that “Jackson ‘expressed anger’ that White House officials — including Kelly — were aware of the physician's concerns over his involvement in the medical situation involving the second lady.” The next day, “Jackson said that Kelly was ‘good with him and everything’ — and Jackson urged the doctor to let the matter go.” Jackson instructed the doctor to “let things go … if I am to succeed in my career.”

That’s textbook toxic leadership — and the White House knew. More to the point, John Kelly, the retired four-star Marine general who runs Trump’s daily affairs, knew. And they pushed Jackson’s nomination anyway, while concealing the charges by Pence’s physician. (Imagine how the Pences must feel about all this.)

So where do we all go from here, with a White House full of people willing to conceal the truth from the American people when veterans’ care is on the line? There’s now word that Trump is thinking about a new VA secretary nominee: John Kelly.

You can’t make this junk up. But if you could, there might be a job in this administration for you.