Three U.S. military service members have been removed from their White House duties after allegedly having improper contact with foreign... 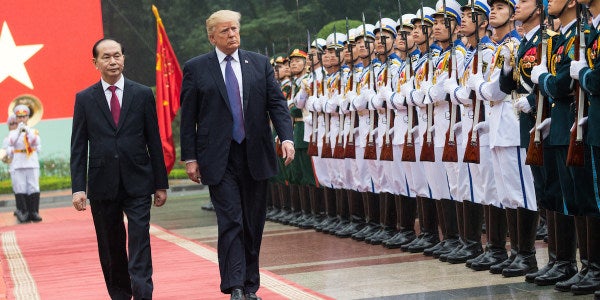 The men, who worked for the White House Communication Agency, allegedly violated their curfews during the president’s trip to Vietnam earlier this month, The Washington Post reported Tuesday.

The agency provides secure communications to the president, vice president and other officials. Vietnam was one of Trump’s stops during his 12-day tour of Asia. Service members are supposed to report their contacts for security reasons.

A Defense Department spokesman confirmed to the Post that the Pentagon is investigating the members’ behavior abroad.

“We are aware of the incident, and it is currently under investigation,” the spokesman said.

The soldiers could lose their security clearances or face court-martials if found guilty, the newspaper reported.

In August, soldiers tasked with protecting Vice President Mike Pence’s communications team were reassigned after bringing back women to their hotel while in Panama City, Panama, ABC News reported.

Pence was visiting Panama, Colombia, Argentina and Chile as part of his trips to Central and South America.